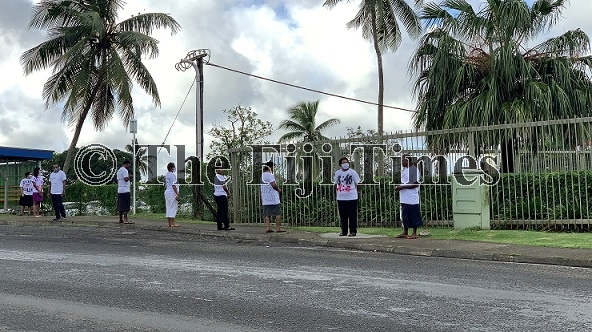 Human rights defenders outside the US Embassy gates in Suva to pay tribute to George Floyd, an African-American man who was allegedly killed by police in the Powderhorn community of Minneapolis, USA. Picture: SUPPLIED

Concerned Fijian human rights activists joined thousands of protesters around the world on Tuesday to pay tribute to George Floyd — an African-American man who was allegedly killed by police in the Powderhorn community of Minneapolis, United States.

Speaking on behalf of the activists, human rights defender Shamima Ali said they placed flowers at the entrance of the US Embassy in Suva and stood there for eight minutes and forty six seconds, signifying the time it took for Mr Floyd to die.

Ms Ali said the activists stood in support of the American people who took a stand against state brutality.

“We did this out of concern and for what happened in America, joining thousands around the world standing in solidarity against state brutality,” she said.

“We stood at the entrance of the embassy silently, keeping in mind the COVID-19 restrictions.”

Ms Ali said police brutality cases around the world, including Fiji, was on the rise and the issue was of great concern.

She said the illegal act of torturing citizens should stop.

His death sparked civil unrest in the United States.