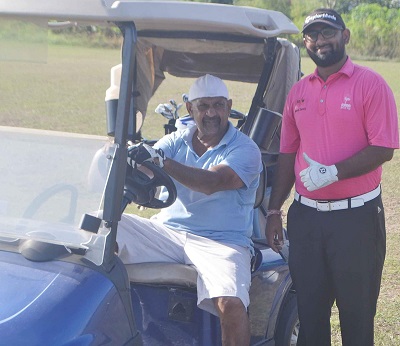 The duo netted 61.25 to pip the consistent pair of Shiva Rajan and Gaffar Ali, who had to settle for second on 61.75.

Brothers Akilesh Shiu and Jay Shiu Ram were rewarded in the Beginner’s category.

Meanwhile, Dinesh Narayan won the nearest to pin (NTP) award on the second hole with Lawrence Naidu on the ninth.

“The club is encouraging parents to register their children aged between 6-16 years for the free golf lessons and start to play golf as a hobby and grasp the basics to enter the competitive level later,” Singh said.

“We have groomed youngsters who are now on their way to become Fijian champions one day.

“You will not know the beauty of golf, until you start playing.”

The starters are Suren Pillay and Raymond Singh.

Looking after the cards are Asish Kumar and Vikash Chand.

“There will be top four team prizes including the juniors and beginners category, the sponsor’s choice and lucky draw. No late entries will be accepted.”

Golfers who want to rebook carts can contact Reginal Ram on telephone 9896335.