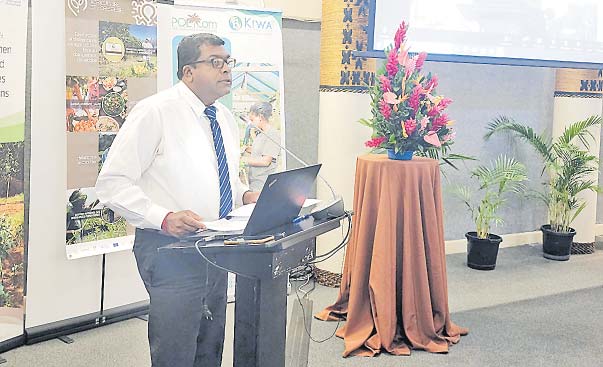 Minister for Agriculture Mahendra Reddy at the opening of the regional meeting of POETCom and organic agriculture stakeholders in Nadi. Picture: SUPPLIED

In a bid to boost organic farming in the country, the Ministry of Agriculture supplied 100tonnes of compost to 33 communities in the Central and Western divisions.

“In 2020, an Organic taskforce was established to finalize the National Organic Policy for Fiji and I would like to acknowledge POETCOM (Pacific Organic and Ethical Trade Community) which has been instrumental in supporting development of Fiji’s first,” he said.

“National Organic Policy as well as Fiji Organic brand that was launched in 2018 to guide and set standards for Fiji and the Pacific,” he said.

“Currently there are a total of 220,000 hectares of certified organic land in nine Pacific Island countries whereby 17 per cent is located in Fiji.

“For a small country like Fiji and the Pacific, with small production base, differentiating its product, as organic, in the export market will allow us to fetch premium price as well as stake claim in the organic market for our produce.”

“As with all organic standards, it is a work in progress, they are not static and 10 years down the track with the POS being used in different Pacific contexts it was time to refresh elements and further develop guidance for its implementation, while importantly ensuring that its Pacific regional relevancy is maintained.”