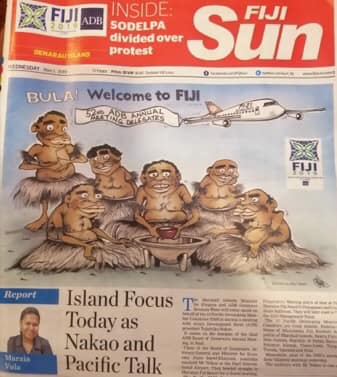 The Fiji Sun cartoon that appeared on yesterday's front page that has angered the iTaukei community. Picture: FB

“IT is disgusting and someone’s head should roll for this.”

This was the view expressed by Social Democratic Liberal Party parliamentarian Viliame Gavoka in relation to a cartoon which appeared on the bond cover of the Fiji Sun on Wednesday.

Many indigenous Fijians also took to social media to express anger against the caricatures depicted in the newspaper.

“It is so disgusting and very insensitive and they owe the indigenous community in Fiji an apology,” he said.

“It really hurts that more than 3000 delegates attending the Asian Development Bank meeting in Nadi saw this.

“And it really hurts that we are portrayed this way.

“If I was the publisher, I would ensure that whoever was involved would be taken to task very severely.”

Attempts to obtain comment from Fiji Sun publisher and CEO Peter Lomas on Wednesday were unsuccessful.