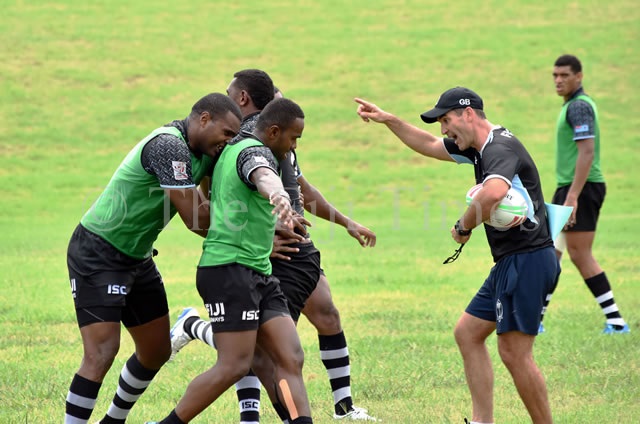 TOKYO, 21 JULY 2021 (WORLD RUGBY) – World rugby caught up with Welshman Baber as he plots Fiji’s defence of the Olympic title they won in Rio five years ago.

It was a celebration that brought Fiji to a standstill. Two weeks after the country’s men’s sevens team had delivered the nation’s first ever Olympic medal, with gold at Rio 2016, the players were treated to a homecoming to remember.

Thousands of fans lined the streets waving flags as the team made its way from Nadi Airport to Prince Charles Park, around nine kilometres away.

More still packed into the stadium, where Fiji’s players and coaching staff embarked on a raucous lap of honour. “We knew it was going to be crazy,” captain Osea Kolinisau said. “But not this crazy.”

Gareth Baber would have watched those scenes from Hong Kong, where he was coaching at the time, but the significance of the celebrations has not been lost on the man who replaced Ben Ryan as the team’s coach in the wake of their Olympic success.

“It’s been mentioned to me every day for the last five years. So, you get some sort of indication of exactly what is expected of you from the country.

“Even though you were playing on the HSBC [World Rugby Sevens] Series and things, the expectation is always that you go and front up, and win gold.

“So, I know that’s my challenge. The players are fully aware of that, they’ve grown up in Fiji, they know exactly what the media will cover and where the scrutiny will lie.

“And, they never shirk away from it. So, for us it is really just the next job of work that we’ve got to do.”

Although Fiji have played only one competitive international tournament in the last 17 months due to COVID-19 restrictions, recent results suggest that Baber and Fiji will be confident of getting that job done again in Tokyo.

Last month, the Olympic champions competed against Australia, New Zealand and an Oceania representative side at the Oceania Sevens in Townsville, and won six out of six matches.

“The biggest challenge for all of our teams is, where are we at? Because, ultimately, if you play in any league or series or whatever it may be in sport, you start to get an understanding and a measure, and you start to get to a rhythm with the way that you play,” Baber said.

“As coaches, you’re able to reflect on how you have played and move the group on, and you just don’t have that.

“So we haven’t had a normal mechanism for players developing the game and for us to develop the way we are as a culture. And so we’ve had to do a lot of work around that.

“The Oceania tournament gave us an opportunity to have a good look at that and all those aspects that build into performance from an individual perspective, but also from a team perspective.

“And, you know, we were robust, we were strong. We didn’t play great in every game and there were areas of our game that we [must] keep working on.

“There were some young boys as well, the first time they’ve ever been tested to that level, and ultimately, that gives you some sort of guideline for when you’re making your selections.”

COVID-19 restrictions in Fiji mean that by the time the team returns home at the end of Tokyo 2020 the squad will have been away from friends and family for 19 weeks.

The team were also required to undergo two-week quarantine prior to the Oceania Sevens, and were locked down for several days in Townsville after the tournament.

Baber has attempted to use the hardships associated with the pandemic as motivation for the Olympics, but admits this period has been the toughest of his coaching career.

“It’s probably the hardest thing I’ve ever done,” he said. “However anybody perceives it overseas, the expectation and the scrutiny on these boys is unbelievable.

“They’re young men and haven’t played professional rugby for a long period of time. They are expected to go out and win for their country.

“Being told they can’t go back and see their families, and [that because of] the spread of COVID in the country, that you’re going to leave the country without having said your goodbyes to the family has been particularly difficult.

“And, as a coaching staff, as a management group, you look for the opportunities in that — even though there may be pain in there — that helps develop and grow the resilience as a group.

“You use those events, not in a silly way, but in a way that is mature and objective and brings attention to potentially the sacrifices and the pain that players go through.

Celebrations are likely to be more muted should Fiji return home with another gold medal at the start of next month.

But, following a difficult period due to the pandemic, Baber believes Olympic success in Tokyo would be no less significant than in Rio five years ago

“I don’t think you can comprehend just how big it would be,” Baber concluded.

“Things are tough there at the moment, and the national identity, national pride is intrinsically linked with the ability to get over their big brothers of New Zealand, Australia, South Africa, those teams that we always think that we stand behind.

“And, in this format, in sevens rugby, we’ve shown time and time again that we could do that. And as I said, it’s a source of national pride.

“It’s so linked with the culture of Fiji and the history and tradition of the game of sevens around the world. And, I’ve been party to it in winning Series and winning Games, I’ve never been party to it at an Olympics.

“And, for the country I just want them to have a celebration. And, I think for these players and the staff as well from Fiji, they deserve everything. I know it’s not going to be given to us, but it’ll be a huge lift for the country.”