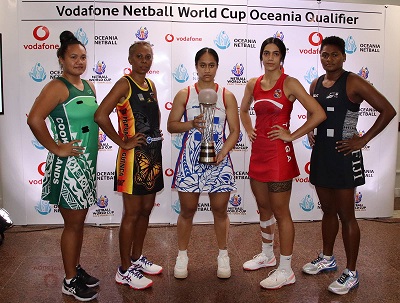 Fiji Pearls captain Alisi Naqiri and her counterparts from the Cook Islands, PNG, Samoa and Tonga during a photoshoot in Suva yesterday (Monday, July 18, 2022). Picture: SUPPLIED

The Fiji Pearls team is ready to take on teams in the region at the Oceania Netball World Cup Qualifiers that starts in Suva today.

Fiji Pearls captain Alisi Naqiri said the first match against Papua New Guinea Pepes would not be easy but her side had prepared well.

“We know fans are expecting a win from us since it’s our first game but Papua New Guinea has been preparing well before coming into this tournament,” Naqiri said.

She said the side had a mixture of youth and experienced players who were expected to shine.

“We have some experienced players, some young ones, a debutant. The past few weeks, we have been working on building combinations and we should be ready for PNG,” the national captain added.

Netball Fiji CEO Vivian Coster said playing in front of home fans would give them the advantage but with that came pressure.

“Our biggest advantage is that we are playing on our home court. The opportunity to play in front of our family, in front of friends, your partner or people – you just know from the netball court, that certainly adds to it,” Coster said.

“That certainly adds pressure but it also adds that added excitement and that added motivation to perform the best that you can,” she added.

The tournament, showcasing six Oceania Nations, will take place at the Vodafone Arena in Suva from today to July 23.

The competing nations – Cook Islands, Fiji, Papua New Guinea, Samoa, and Tonga — will be battling out with the top two teams qualifying for the Netball World Cup 2023 in South Africa.

The Fiji Pearls take on PNG at 5.30pm after which Samoa takes on Tonga at 7.30pm.