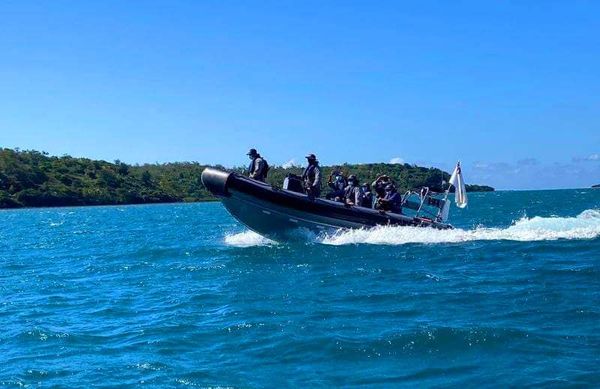 Sailors of the Fiji Navy on patrol. Picture: FIJI NAVY/FACEBOOK

Despite the COVID-19 exposure to some of the personnel, sailors in the Fiji Navy continue to support national efforts in maritime security and safety tasking.

The Fiji Navy stated that on completion of the operation Tui Moana last week, the RFNS Savenaca was re-deployed to conduct surveillance and deterrence operations in Fiji’s inshore and archipelagic waters.

It stated that Maritime Law enforcement and maintaining presence in support of a multi-agency taskforce in maritime restrictions movement enforcement were the priority the past week.

“The Fiji Maritime Surveillance and Rescue Coordination Centre was pre-positioned to two other locations this week as a contingency following the COVID exposure at Stanley Brown Base,” the Fiji Navy stated.

“The centre continues to operate as normal from these two locations with main support from Stanley Brown Base. The call centre 1539 remains functional.”

It stated that an eight-men team based out of Denarau in Nadi continued to support the Government’s Blue Lane initiative.

Those personnel had been deployed for more than two months now.

The RFN stated that a few personnel who were recently exposed to the COVID-19 virus had recovered, with more recoveries expected in the coming week.

“We look forward to having them back on board to continue the work.

“Despite the setbacks experienced in the last couple of weeks, we continued to operate as best as we can utilising existing contingencies and with the resilience and team work of our personnel.”