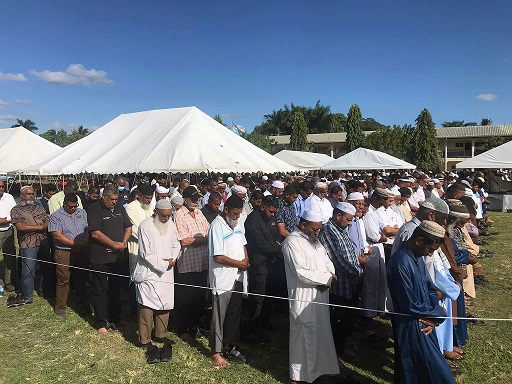 Hundreds of Muslims, well-wishers and friends paid their last respects to the late Fiji Muslim League national president Hafizud Dean Khan who was laid to rest in Nadi yesterday.

Mr Khan who died after a short illness at the Lautoka Hospital on Sunday, was accorded a farewell that brought together Fijians and expatriates from all walks of life.

“While he was a member of so many statutory boards, the presidency of the Fiji Muslim League was the feather in his cap,” said Mr Ali.

“According to him, it was his religious calling and obligation to serve the Muslim community.

“He ensured that the small Muslim community was intact and vigorously promoted unity amongst Muslims, its branches, members and within the framework of its constitution.

“He was a strong advocate of transparency and accountability of all league assets.”

Mr Khan was the founder and chairman of the Hexagon Group of Companies.

He held several roles, including a Senate seat in Parliament in 2005 and 2006.

He was a former chairman of the Fiji Sugar Corporation board, a member of the Fiji National Tourism Council, the Fiji Hotel and Tourism Association and he served in the Public Service Commission Consultative Forum.

In 2017 he was awarded the Officer of the Order of Fiji from then president of Fiji, Jioji Konrote.