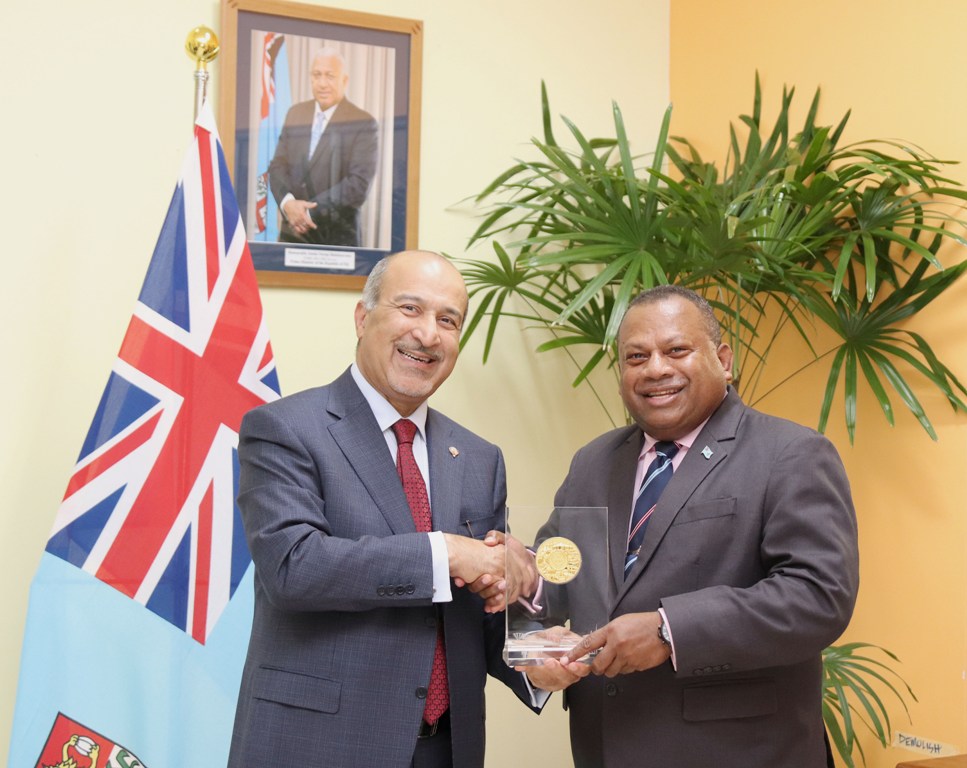 Non-resident Ambassador of the State of Kuwait to Fiji Ahmed Salem Alwehaib while paying a courtesy call to the Minister for Defence National Security and Foreign Affairs Inia Seruiratu. Picture: SUPPLIED

BILATERAL cooperation between the Republic of Fiji and the State of Kuwait is expected to strengthen in potential areas of mutual interests and benefits.

This follows the successful meeting the Minister for Defence, National Security and Foreign Affairs Inia Seruiratu had with non-resident Ambassador of the State of Kuwait to Fiji Ahmed Salem Alwehaib earlier this week.

Both the parties have expressed interest to enhance their partnership towards Fiji’s priority sectors and sustainable development goals mainly in addressing climate change and oceans preservation.

The two countries also shared similar sentiments on the important role of peacekeeping in maintaining international peace and security.

Kuwait was the first country in the resource-rich Gulf Cooperation Council to establish formal diplomatic relations with Fiji in 2005.

Kuwait through its development agency, the Kuwait Development Fund for Arab Development (KFEAD), has been instrumental in availing technical assistance to Fiji, including the feasibility study of the Savusavu water and wastewater infrastructure.

Its support is also recognised as the development partner for the convening of the inaugural Pacific Islands Development Forum (PIDF) summit and for providing employment opportunities to a number of Fijian nationals who currently work mainly in the security and retail sector.

Kuwait is a current non-permanent member of the UN Security Council for the term 2018-2019. Fijian peacekeepers have served in the Middle East and particularly in Kuwait as Observers under the United Nations Iraq-Kuwait Observation Mission (UNIKOM) mandate during the conclusion of the first Gulf War.