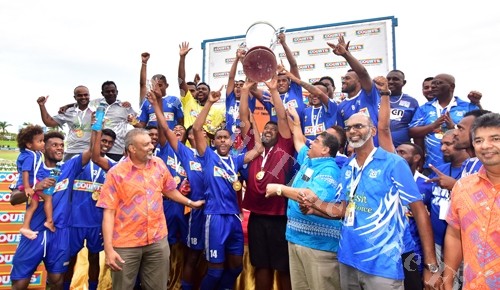 Lautoka has made a winning start to the 2018 Rams Cleaning Pacific Cup tournament. The Lautoka side celebrate their IDC win in this file picture. Picture: FT FILE/RAMA

THE Fijian teams have made a good start to the 2018 Rams Cleaning Pacific Cup tournament that started in Australia yesterday.

National League and IDC champions Lautoka made a flying start to the tournament thumping Sydney All Stars 5-2 in the last match of day one.

The teams were locked 2-all at half-time.

In other matches, Mohammed Rahimi scored a goal for Rewa in their 1-all draw against Western Sydney while Tito Todowaqa scored the lone goal in Nadi’s 1-nil win over USA All Stars.

In matches tonight, Suva battles Auckland at 9.15pm while Lautoka takes on USA All Stars at 11.45pm.