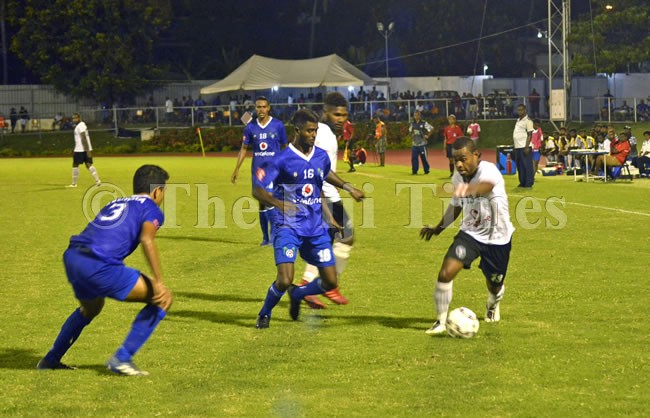 SUVA booked a spot in the semi-final of the 2019 Vodafone Fiji FACT after a 1-all draw with hosts Lautoka in the final Group A match at Churchill Park last night.

The Capital City boys scored in the 17th minute through Solomon Islander Gagame Feni while Dave Radrigai levelled for the Blues from the penalty spot in the second half.

The result pushed Labasa out of the tournament. Lautoka coach Kamal Swamy said it was anybody’s game as both teams created good scoring chances.

“Coming out with a draw from the match is a positive result,” Swamy said.

“In the first half we did not play like we did in our first two games. Suva came out firing because we were sitting at the back.

“We needed to play ball to the foot of the players and it was all about our passing.

At half time, I told the boys to push up and the midfielders did just that and we created our chances. “Finishing as the group winner is an advantage for us.”

The Sugar City side will face Nadi in the first semi-final on Saturday. Swamy said nothing should be taken away from Nadi who were surprised by Nasinu with the fixture ending in a 1-all draw yesterday.

“We need to work on our weaknesses. There are some niggling injuries but we are hopeful that the boys will recover in time.

“It will be a pressure game against Nadi since we have not won the Fiji FACT title in many years. We will try our best to bring some glory back to the Sugar City.”

Suva coach Saroj Kumar said their ploy to pressure the Lautoka players in their own territory worked out well.

“We did our best to contain them in their own territory,” Kumar said.

“We wanted to pressure them into making mistakes so we could score one or two goals and we nearly scored a second.

“I would like to thank all the Suva fans who made their way down to the West to cheer the boys. “In this tournament Suva has proven that they can rise up again to become a force in football.”