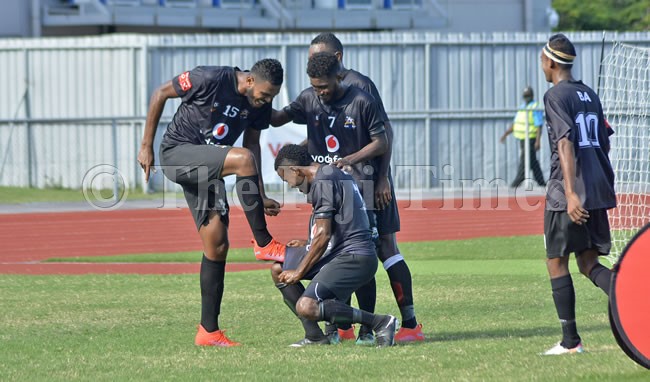 Ba captain Ilimotama Jese cleans the boot of his teammate Saula Waqa as they celebrate Waqa’s goal against Rewa during their match in the Vodafone Fiji FACT at Churchill Park in Lautoka. Picture: REINAL CHAND

The Ronil Kumar coached Men in Black were dominant in attack, especially in the second half.

Lanky striker Saula Waqa opened the account for Ba in the 26th minute after connecting with a cross from Darold Kakasi.

Ba led 1-0 at the break. Ba grew with confidence in the second spell.

Mohammed Shazil doubled Ba’s advantage in the 49th minute with an easy tap in. Ratu Dau scored from the penalty spot in the 62nd minute.

“Rewa gave us a tough time but I guess our boys withstood the pressure and had the confidence to get the three points,” he said.

“We were shocked by Nasinu with the 2-all draw and it was a motivating factor for the boys to lift themselves against Rewa.”

The Delta Tigers needed to beat Ba to stand a chance of defending their title they had won last year in Nausori however fell short recording one win and two losses in the tournament.

Rewa coach Pita Rabo said it was the end for them in the Fiji FACT and they could to build on the momentum from day one.

“The players did their best but it was not enough to take us through to the semi-finals,” Rabo said.

“We will now concentrate on the Vodafone Premier League since we are at the bottom half of the points table. We will play Ba in the VPL next and we will prepare for that match in two weeks.”