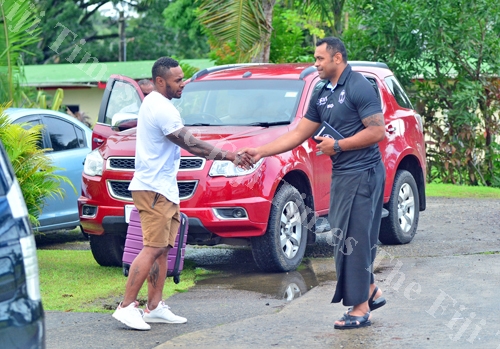 Benito Masilevu, left, is greeted by Akapusi Qera at the Fiji Airways Flying Fijians camp at the Pacific Theological College in Nasese, Suva on Tuesday, May 29, 2018. Picture: JONACANI LALAKOBAU

FIJI Airways Flying Fijians head coach John McKee is working towards getting the best and the toughest preparation for the national side in the lead-up to the 2019 Rugby World Cup in Japan. He is eyeing a Test in November against tier one team France or Scotland, or tier two Uruguay.

McKee revealed this yesterday in Suva when the Flying Fijians marched into camp for the World Rugby Pacific Nations Cup fixtures against Samoa, Tonga and Georgia.

He said the Fiji team would utilise every Test to prepare well for the RWC in Japan.

“We are concentrating on the June Test series and we will know in November who we are playing. It’s either Scotland, France or Uruguay,” he said.

“Next week we have the Pacific Nations Cup. We are talking to some teams and once things are signed then we can announce full schedules together for next year through July to September. “We need to make sure that we are the best prepared team come the Rugby World Cup.”

The players moved into camp at the Pacific Theological College in Suva yesterday.

“From now to the Rugby World Cup, we will play 12 Test matches and possibly 13, but we’re finalising our schedules. It is not a lot playing those number of matches, but we need to make the most of every game. “We always work very hard around our core skills and on one hand we have highly talented players to play Test match at high intensity. We need to be very good at our core skills. The big part of our game is to win quick balls and create opportunities for our dangerous players in the contact and ruck areas because we can attack those areas very strongly.”