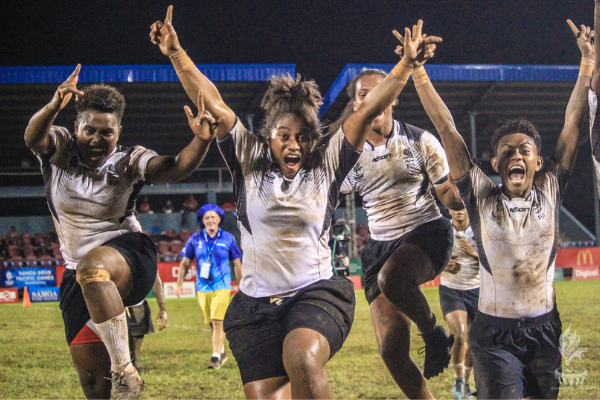 APIA, 10 JULY 2019 (INSIDE THE GAMES) – Fiji saw off the challenge of Papua New Guinea to claim both rugby league nines titles at the Pacific Games here Tuesday, with the women’s competition having been contested for the first time.

Fiji’s women’s team ended the hopes of the host nation in the semi-finals when they overcame Samoa 12-4, while Papua New Guinea earned a 14-8 victory over the Cook Islands.

A closely fought first-half in the final saw Fiji edge into a narrow 4-0 lead, with just a solitary try separating the two teams.

Fiji extended their advantage early in the second-half and held a 10-4 advantage as the seconds ticked down.

The first women’s rugby league nines gold was sealed with a breakaway try as the buzzer sounded, Fiji triumphing 16-4.

Cook Islands beat Samoa 24-10 in the bronze medal match to ensure their place on the historic podium following the decision to add the women’s event for the first time last year.

The men’s final followed a similar pattern to the women’s with Fiji leading Papua New Guinea by one try at the interval.

Fiji added two further tries in the second-half to earn a comfortable 14-0 win.

Bronze was earned by hosts Samoa, who overcame Tonga 16-12.

New Caledonia emerged as the winners of the men’s race in a time of 1min 49.43sec.

Wallis And Futuna and Fiji completed the podium places in times of 1:50.06 and 1:51.50 respectively.

The first weightlifting medals of the Games were also earned, with gold medals available in total, snatch and clean and jerk disciplines under Pacific Games rules.

Kiribati’s Tebora Willy claimed all three golds in the women’s 45 kilograms event, including sealing the overall title on 119kg.

Papua New Guinea’s Konio Toua and Daniella Ika of Nauru rounded off the medal positions on 115kg and 82kg.

Toua’s older sister Loa Dika scooped the three titles in the 49kg event, including winning the total event with 175kg.

The podium was also identical in the snatch and the clean and jerk disciplines.

Nauru’s Elson Edward Brechtefeld won all three golds in the men’s 55kg division, with 215kg giving him the total victory.