Fiji can win in Paris 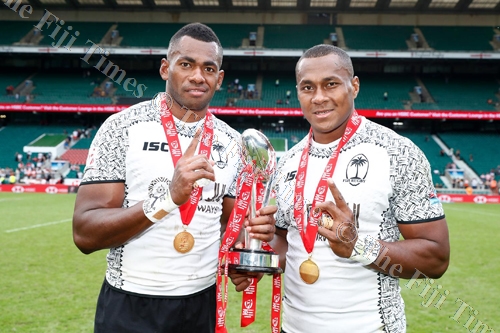 SO, Fiji just need to finish third in Paris this weekend to secure the world title. Should be easy-peasy, eh? Well, not necessarily.
Fiji have been here twice before. In the very first World Sevens Series of 1999-2000, Fiji just needed to reach the cup semi-finals of the final tournament in Paris to claim the inaugural world title ahead of rivals New Zealand. In each of the preceding nine tournaments, the final featured these two teams who really were several levels above the rest in those early days. Alas, as many of us remember so vividly, Peni Veidreyaki’s men bombed out of the cup quarter-finals to Argentina 35-21 to hand the title on a platter to New Zealand.
Seven years later in Edinburgh, Waisale Serevi’s charges were all set to retain the world crown they had won so spectacularly 12 months earlier. What should have been a routine win over Wales in the cup quarter-final in the final tournament went all awry and they fell 21-14 to the Welsh, who were not then the force they are now. Again, New Zealand capitalised and took home another World 7s Series title, much to the annoyance of Fiji’s faithful fans.
But Gareth Baber’s boys are currently on another planetâ€¦ four tournament titles in a row, 25 consecutive wins, six out of six wins over South Africa in 2018, and five out of five against New Zealand since Sydney.
Surely they’ll do it? They must. The players and management have put far too much work and sacrifice into this season to return home as series runners-up.
But it’s not straightforward. In another tough pool, Fiji face New Zealand (again), Kenya and Samoa. Just negotiating a safe passage into the knockout stages these days can be a strenuous affair. If they reach the quarters, chances are either England or USA will stand in their way of the world title. Both teams have beaten Fiji already this season.
In London, coach Baber talked of playing six finals in two days; this weekend it’ll be five finals, and once these are won and the HSBC title is safely in the bag, it’ll be a case of whether Fiji ease off in the final match (like they did after winning the 2014-15 title) or use it to test combinations ahead of next month’s Rugby 7s World Cup.
After two days of brutal tackles at Twickenham, Baber revealed to The Fiji Times that Josua Tuisova and Semi Radradra will not feature this weekend in Paris, but Toulouse-based Semi Kunatani and former world 7s player of the year Samisoni Viriviri will return; as will Tabadamu playmaker Apenisa Cakaubalavu.
“Olympic gold medallist Leone Nakarawa will go back to Fiji for the Test series,” Baber explained. “He is still a bit of a question mark with regards to the World Cup. I’d love to have him involved, but we’ll have to see whether it’s right for him, right for his club and right for Fiji as well.”
Radradra, who finished as Player of the Final at Twickenham, is now paying back some of the investment the Fiji Rugby Union made back in 2011 when he played as an 18-year-old in the Junior World Cup in Italy and then in the opening three legs of the HSBC 7s Series. As an up-and-coming talent, the former Vatukoula centre looked destined for Test rugby with the Flying Fijians, only to be suddenly pinched by NRL side Paramatta Eels who ghosted in with a contract while other interested parties hesitated.
Radradra’s accolades and awards while at the Eels are matched only by his statistics —— 82 tries in 94 games before turning 25. There wasn’t much he couldn’t do on a rugby field, and French powerhouse Toulon came calling in 2017 as the Somosomo villager switched back to union with one eye on the 2019 Rugby World Cup.
Having just signed a two-year deal with Bordeaux Begles, he teamed up with Tuisova and Josh Matavesi as the famous Barbarians destroyed England 63-45 at Twickenham last month. And now he admits, using language he no doubt learned in Australia, that he’s just going “to work his a!#s off” in an effort to get selected for the 15s World Cup, and that it “would be a privilege” just to play alongside his Fijian brothers.
Also 25 but with a totally different style, Tuisova already has five seasons of Top 14 rugby under his belt. He occasionally looked out of puff at the London 7s, but he scored some sensational tries when it mattered most, the most important being Fiji’s first in the final against South Africa when he bulldozed his way through three defenders then outsprinted the cover from halfway.
He makes us laugh too, like when he hid from the Irish players behind the goalpost padding before touching down for a try; and, my personal favourite, when he left New Zealand wing Salesi Rayasi for dead from a standing start, dotted down for a try, then handed the ball back to All Blacks 7s skipper Kurt Baker just to rub it in.
A few minutes later, Radradra stepped Baker in the corner with ridiculous ease. I don’t think I’ve ever seen Baker go so long without smiling.
And though these two European-based stars were grabbing all the headlines, every single member of Gareth Baber’s squad did their country proud at Twickenham.
The unsung heroes were probably the forwards, in particular Sevuloni Mocenacagi and Paula Dranisinukula, a pairing on par with Jope Tuikabe and the late Aminiasi Naituyaga in their heyday.
A player that has entered the fray during Baber’s tenure, Mocenacagi already looks close to the finished article —— superb at restarts, excellent hands and speed to boot, not to mention the ferocious tackles.

And Dranisinukula showed consistently throughout the tournament, earning himself a place in the official Dream Team alongside Tuisova and Radradra.
Baber’s coaching style is centred around developing individuals, not just rugby players. The softly spoken Welshman had giant shoes to fill when he took over from the incomparable Ben Ryan 18 months ago. Did anyone seriously believe he could match Ryan’s performances?
Well, on current form, no-one could argue that Baber isn’t the perfect follow-up to Ryan. He has a similar professional work ethic and has adjusted to living in Fiji very quickly.
When this beautiful winning streak began a couple of months ago, Fiji were pipping their opposition in the final moments of intensely close games — they did it against Samoa, against New Zealand, against Australia and also against South Africa. But now, they lead from the front and appear to be in cruise control by half-time.
Baber says that is “all down to the end product, which is getting better players on the field that show emotional control, and better decision makers; and putting them under pressure in training to see exactly how that works. That’s a bit of my methodology, it’s not hugely scientific.
“I’ve worked with lots of coaches around the world and I’m doing a lot of similar things to what they do,” Baber told The Fiji Times. “I think the development in performance that is happening is down to the individuals that are representing Fiji at this point in time.
“I’m a big believer in that as a coach you develop the individual, you don’t just develop the player, and the reason that sticks in my head is that I’ve had a lot of coaches that were very dictatic in the way that they coached meâ€¦ the best coaches I had were the ones that tried to encourage me in many avenues, not just in rugby.”
And so, back to Paris. Baber has the luxury of an experienced management team in assistant coach Saiasi Fuli, trainer Naca Cawanibuka and physio William Koong to keep the players relaxed and focused. He has a long way to go to equal Gordon Tietjen’s record of seven consecutive tournament titles and no fewer than 47 wins on the trot back in 2007-08. But that was 10 years ago. This is now. Fiji are on the verge of greatness once moreâ€¦ not just because they are winning tournaments, but the way they are winning them — audacious handling, spectacular off-loads, rib-crunching tackles and a never-say-die attitude in defence.
The whole country can be proud.