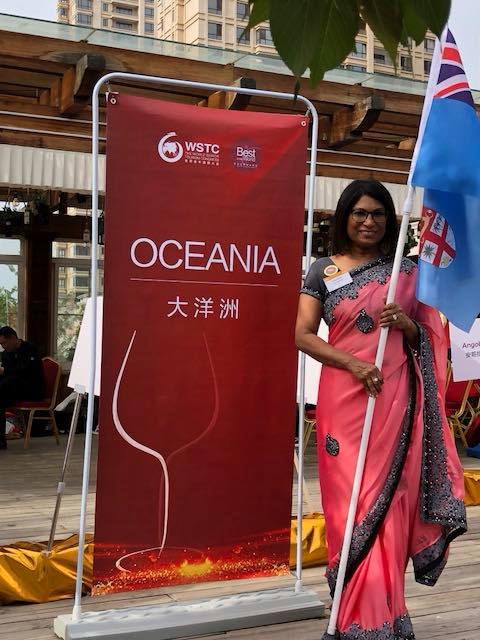 Fiji-born author Sadhna Wilson with the Fijian flag at the awards ceremony in China. Picture: SUPPLIED

FIJI-born author Sadhna Wilson recently received two awards at the Best in the World Gourmand World Cookbook awards held in Yantai, China.
Mrs Wilson who has made a home in Australia for the last 36 years published her cookbook titled ‘Tropical Vegetarian’ last year and was awarded the Charity Cookbook award and Vegetarian Cookbook award at the awards ceremony last month.
“I have undertaken the project of documenting Indian food and culture in Fiji as to date, our ancestors’ legacies through food has not been documented,” Mrs Wilson said.
“My ancestors were philanthropists and as such, those values have been instilled in me as well,” she said.
“It was such an honour to receive this recognition for my book ‘Tropical Vegetarian’ and I was very honoured to carry the Fijian flag at the awards.”
She said her book was also shortlisted as ‘The Best Indian Cookbook 2017’.
Mr Wilson said the Gourmand Cookbook Awards is run by the Cointreau family from France and the awards have become known as the Oscars of the Book Awards.
“I am working on my next book, which will feature home cooks from Fiji so collectively, we will be able to leave a legacy for our children as well as preserve our heritage and culture.”
Mrs Wilson said all the profits from the sale of her book would be donated to the Walk on Walk Strong (WOWS) Kids Fiji that is currently looking after children with cancer in the country.