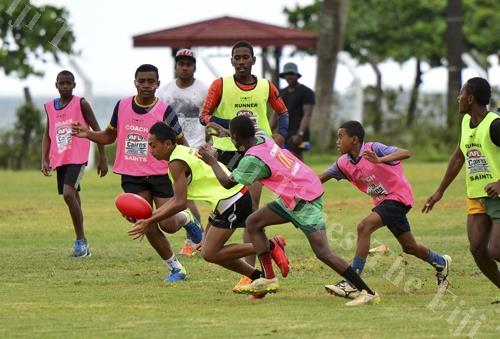 U14 and U15 boys in action during an earlier Fiji AFL trials at Bidesi Park in Suva. Picture: JOVESA NAISUA/FILE

AUSTRALIAN Football League (AFL) Fiji’s current talent pathway is to provide an opportunity for their young players to travel to Australia to compete in the Queensland State Academy Championships.

Earlier this year they had five of the best U16 boys come across and all performed admirably, after being selected in the South Pacific team following the Oceania Cup.

Development officer Simon Highfield said the development of these young players means brighter future for the sport in the future.

“These junior players should now be back in Fiji competing in the Powerade Cup and executing what they learned during their time in Australia,” he said.

“All our U15 players currently in Fiji should be looking ahead to the Oceania Cup later this year, where Fiji will be attempting to defend their title.”

Highfield added the Powerade Cup is essentially their breeding ground, with the slow improvement in this competition relating directly to how they will perform at the next International Cup.