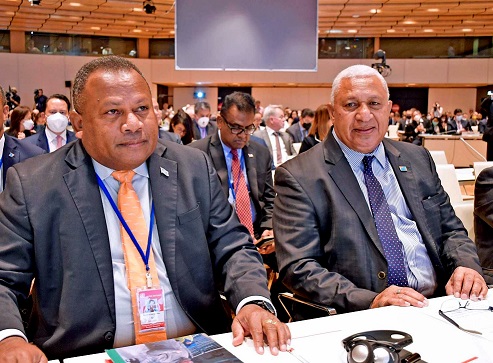 Defence minister Inia Seruiratu (left) and Prime Minister Voreqe Bainimarama during the first Meeting of States Parties to the Treaty on the Prohibition of Nuclear Weapon. Picture: Fijian Govt

The cost of producing nuclear weapons is keeping resources away from addressing issues that matter like climate change, the COVID-19 pandemic and global food shortage.

This was the view expressed by Prime Minister Voreqe Bainimarama during the first Meeting of States Parties to the Treaty on the Prohibition of Nuclear Weapon.

Fiji joined over 86 states to adopt a treaty on the prohibition of nuclear weapons and take the first step back from the knife edge of Armageddon.

Mr Bainimarama said they would work with all states to ensure a nuclear-free world and to heal the wounds of a dark nuclear legacy that continued to harm lives and communities throughout the region.

“It is not idealism that convinced us, it is level-headed commonsense that calls on us to do away with this means of species extinction,” he said.

“Neither are we the fringe of the debate, we are a coalition, united by a shared value for human life.”

He said Fiji had contributed more of its sons and daughters to United Nations peacekeeping missions than any other country per capita.

“A global food crisis rages on a scale not seen in our lifetimes and a runaway climate crisis threatening livelihoods and the very future of our civilisation.

“Nuclear weapons will never defeat these enemies, they do not feed us, and they do not clothe us or keep out the rising seas.

“They are relics, multitrillion dollar monuments to the worst horror that war can create. They epitomise the same short-sightedness that created the climate crisis, worsen the pandemic and continues to keep food from the hungry.

“Worse, the staggering expense cripples our response to these challenges.”

Mr Bainimarama said the region had been used as a testing ground for nuclear weapons, and the perpetrators had turned a blind eye to the repercussions of their actions.

“We welcome this treaty’s consideration of the plight of those affected by the use and testing of nuclear weapons who have been silenced and denied the care and support they needed.

“I urge us to go further for these survivors by creating a policy framework that considers the existential impact on the nuclear testing of our oceans and environment, exacerbated by the climate crisis, and its long term consequences of the displacement of communities from the traditional lands due to ever encroaching nuclear waste.”