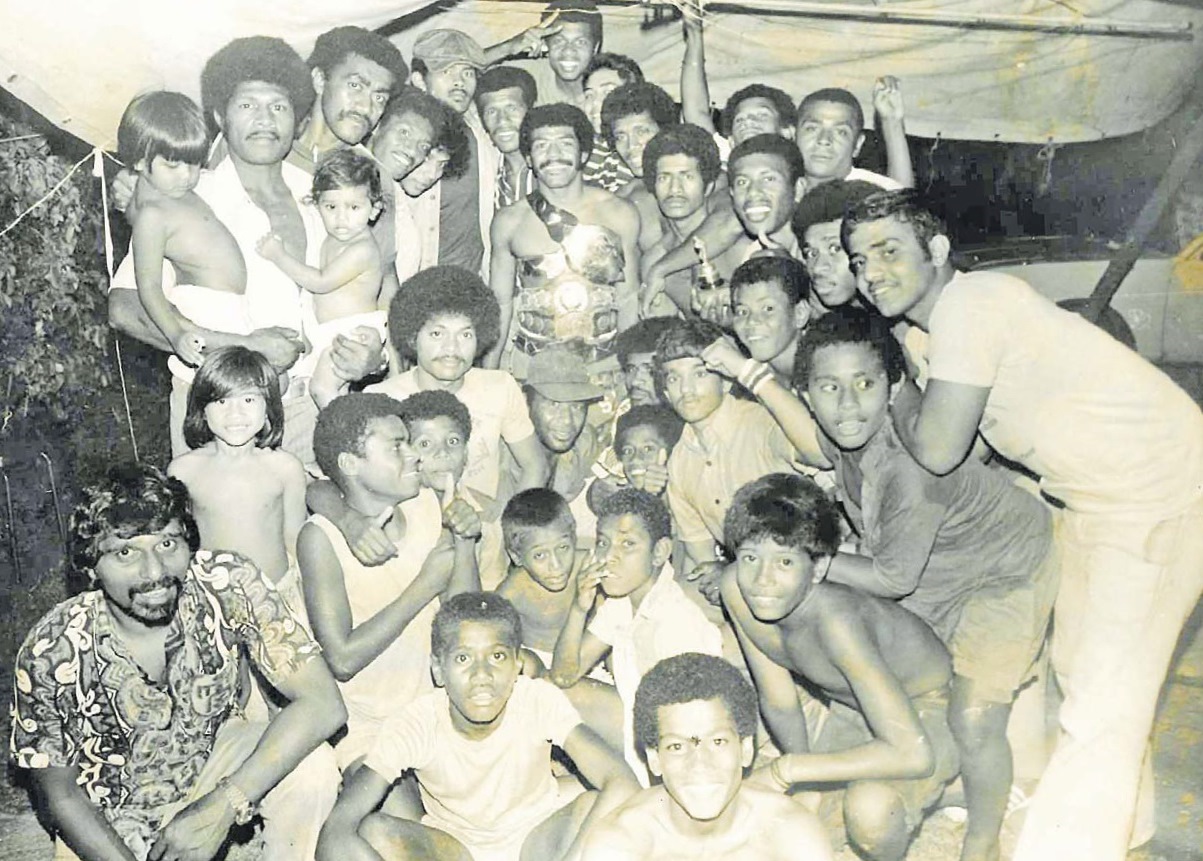 Fans with Sakaraia Ve, with some of his belts, after a fight. Picture: SUPPLIED

In the past two weeks, Fiji’s ‘Golden Boy’ Sakaraia Ve reminisced on his heydays, especially in one of his biggest and toughest fights.

It was against Jone Mataitini on March 2, 1978 in Suva. They fought for the Commonwealth (British Empire) Welterweight belt. Ve said this was one of his toughest fights.

There were busloads of Mataitini’s supporters from the West.

Ve underestimated Mataitini, and into the 10th round, the western giant was unleashing his fury on the stoutly built Nacobo villager who is trying to make his name in the boxing ring.

To Ve that day, unforgettable until today, Mataitini taught him one of the secrets of boxing and that is not to count your chicks before they hatch.

But let’s read on as Sakaraia Ve takes us back to how he survived the onslaught amidst defeaning cheers for the giant Mataitini.

“I danced in front of him and weaved and ducked my way around his punches and around him. I used the ring. Punches were flying around my head and tips of his gloves hitting my body. The cheers against me got louder.

“Even to the 13th round, the cheers got louder for him to finish me. I rarely threw a punch. I defended all along. It made him angry too. I was disappointed that at this stage when I needed my fans to support me, I could not hear their cheers. All around me were cheers for Mataitini. His fans were cheering “nokataki koya” (knock him out). He should have won because he was experienced and I was tired. From the 11th to the 12th round I rarely threw punches so that I could regain some energy. I heard the fans cheering against me and in me I knew some people there hated me. The comments were abusive and not sporty. That was unfair. They were angry because their prediction against me were wrong.

“I’ll say something for the first time since that fight. It has always been inside me all these years. Some people will not believe this, but after I stood up and walked slowly to the middle of the ring to touch gloves in the start of the 13th round, I said this prayer ‘My Lord, I am now alone. Everyone is against me. My corner is silent, my fans are silent, help me in what is left for me to do in the 14th and 15th rounds’.

“As we touched gloves, I felt something different inside me. I was confident. The fear of losing had gone. It was like my energy was renewed. As soon as we traded punches, I threw one hook at his midrib. That was the killer blow. I saw him wince and his face was in pain. I moved in, did not stop and delivered the best I got in that round. I knocked him in the 14th round and the crowd was silent.

“There was silence. Pin drop silence for a few seconds, and boom; my fans cheered my name. Everyone was shocked.

“Until today I am still baffled at what happened that night. It was a special win and I also learned a lot from that fight as I continued in my career. Years later we used to meet in Nadi, but that fight against Mataitini, was the biggest fight Fiji has ever had and one that I will never forget.

“Au sa qase (I am old now). This month is my birthday and I just want to share what I went through. I have achieved what I had done and through the talents that God gave me. It’s time I relate my stories. There will be more.”