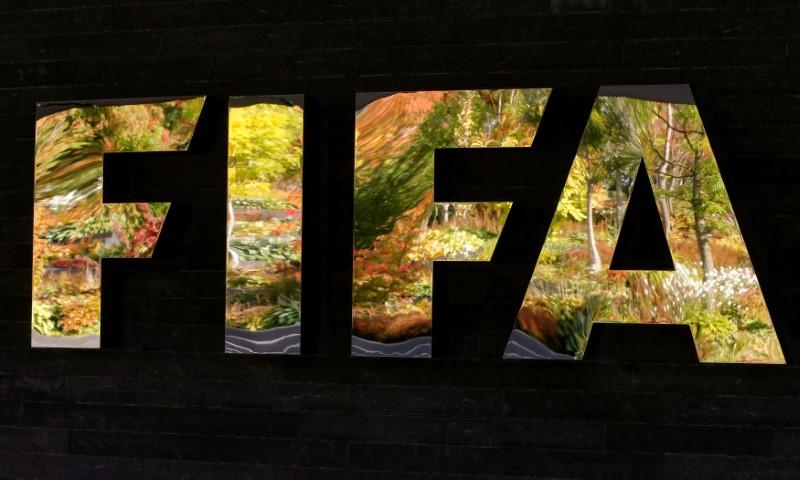 FILE PHOTO: FIFA's logo is seen in front of its headquarters during a meeting of the FIFA executive committee in Zurich, Switzerland September 25, 2015. REUTERS/Arnd Wiegmann/File Photo

Team media officer Ulrich Voigt and a German FA (DFB) employee in charge of the DFB office for the national team, Georg Behlau, charged toward the Sweden bench pumping their fists when Toni Kroos’ stoppage-time goal gave Germany a 2-1 victory.

The Swedish coaching staff and reserve players stood up and immediately confronted them and shoved them back toward their technical area. The incident almost escalated into a wider physical altercation after Swedish officials pushed Behlau away.

“The FIFA Disciplinary Committee has opened disciplinary proceedings against the German officials Ulrich Voigt and Georg Behlau for incidents at the end of the match Germany vs. Sweden,” FIFA said in a statement on Sunday.

The incident was caught on camera and quickly went viral while also promoting angry reactions from the Swedish coach and players. Sweden’s Emil Forsberg labeled the Germans’ behavior “disgusting.”

Germany’s coach Joachim Loew said he was not aware of the incident.

The DFB said the pair had since apologized to the Swedish team.

“Both are members of the national team’s technical staff. Both charged the Swedish bench. That was a mistake they both sincerely regret,” national team spokesman Jens Grittner told Reuters.

“Within a few minutes, they apologized to the organizational lead of the Swedish team and also to Sweden’s coach. Nobody was punched or kicked by them, no swear words or curses were exchanged, but still, the behavior was wrong.”

“The DFB as a whole regrets the incident and apologized to the Swedish team and delegation.”

Grittner did not say whether the DFB would take any action against its own employees.

The DFB, bidding to host Euro 2024, also did not say whether it had stripped the pair of their accreditation or if they will be part of their pitchside team at their final Group F game, against South Korea on June 27.

Germany, World Cup winners in 2014, lost their group opener against Mexico. Their late victory over the Swedes threw them a lifeline for a spot in the next round.