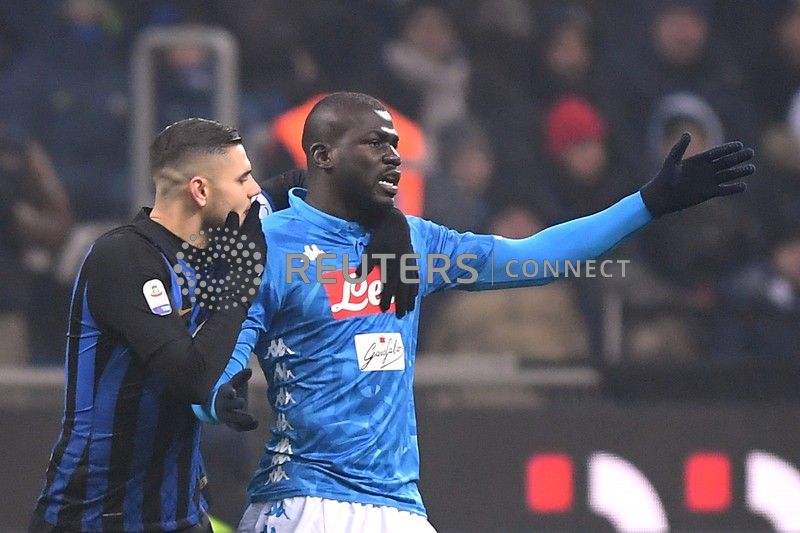 (Reuters) – FIFA is doubling its minimum ban for racist incidents to 10 games and will allow players to make victim statements and participate in the proceedings, world soccer’s governing body said on Thursday.

Stricter punishments against racism and other discriminatory behaviour was a key part of FIFA’s updated disciplinary code which takes effect from Monday.

“FIFA’s Disciplinary Committee may permit the victim to make a statement, allowing the latter to participate in the proceedings. FIFA will not let down victims of racist abuse,” the body said in a statement.

The changes follow on from several high profile incidents last season in domestic and international football.

Koulibaly, who received a red card for showing dissent, was banned for two matches, sparking criticism that the victim was being punished.

Montenegro were also ordered by European governing body UEFA to play a home game behind closed doors as part of sanctions handed out for the racist behaviour of their supporters during a match against England.

The updated FIFA code expands the scope of what is considered discriminatory behaviour to anything related to “race, skin colour, ethnic, national or social origin, gender, disability, sexual orientation, language, religion, political opinion, wealth, birth or any other status or any other reason”.

A match will be forfeited by the team if their supporters are found to be guilty of racist and other discriminatory behaviour.

“For a first offence, playing a match with a limited number of spectators and a fine of at least 20,000 Swiss Francs ($20,220) shall be imposed on the association or club concerned,” FIFA said.

“Unless there are exceptional circumstances, if a match is abandoned by the referee because of racist and/or discriminatory conduct, the match shall be declared forfeited.”

The match can be forfeited after the referee has applied a “three-step procedure” for such incidents, which includes requesting a public announcement to call for such behaviour to cease, suspending the match until it stops, and in critical scenarios, abandoning the match altogether.

The updated code also includes the option of imposing transfer bans on clubs which default on debts in cases processed by FIFA and the Court of Arbitration for Sport.

“FIFA has a duty and responsibility to ensure that those who play football can do so in a safe, positive and enjoyable environment,” FIFA Secretary General Fatma Samoura said.

“I am confident that the FIFA Guardians programme will help to mobilise action and guide our 211 member associations around the world in reviewing and implementing their own safeguarding measures to keep children safe in football. FIFA believes this to be every child’s right.”