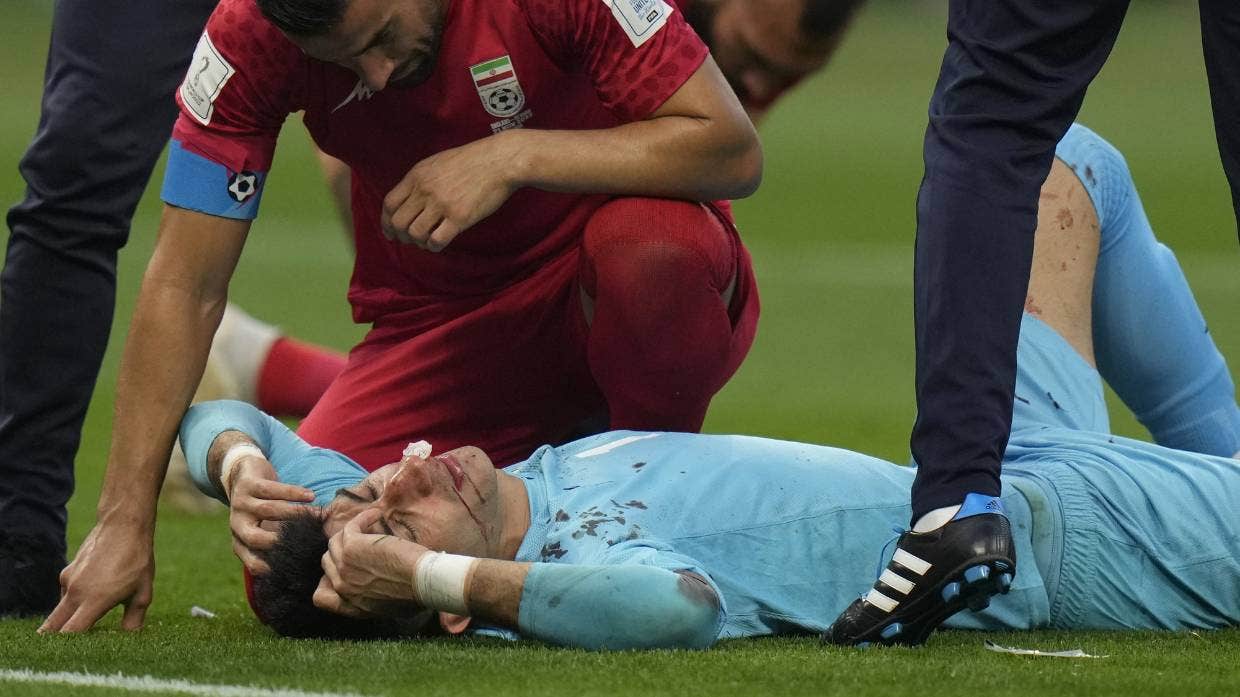 World football has been accused of endangering players and a “stone age” approach to brain injuries after Iran goalkeeper Alireza Beiranvand was allowed to play on against England following a sickening blow to the head.

Beiranvand, 30, was caught square in the face by team-mate Majid Hosseini as they defended an England attack from the right flank, and required lengthy on-field treatment.

He was, however, still allowed to continue playing for a further minute before falling to the turf and finally being taken off in the 20th minute, some nine minutes after the initial blow.

Brain injury campaigners, including the former England striker Alan Shearer, have long been calling for world football to introduce the sort of temporary concussion substitutes that have become commonplace in other sports, notably rugby union and American football’s National Football League.

“You’re never going to get a player saying ‘yeah I want to come off’. Clearly you could see he wasn’t fine. They’ve even introduced another medical advisor who is in the stands to look at video footage, to give advice to the medics who are on the pitch. What on earth is he doing?”

A temporary concussion substitute would allow a player to be assessed in the presence of an independent medic, away from on-field pressures, notably players and coaching staff who might desperately want a star player to continue.

Beiranvand, whose 80-metre throws are a feature of Iran’s tactics, was eventually taken off and manager Carlos Queiroz could be seen showing his frustration with his head in his hands.

During the delay, England players had to keep warm with extra balls on the pitch so they could pass among themselves, even though substitute goalkeeper Hossein Hosseini had been changed and ready to replace Beiranvand.

Queiroz later said Beiranvand had suffered a “serious concussion” but there had initially been doubt as to whether there was a neurological injury. “We thought he could keep going,” he said.

“It was not clear but, one minute after, the player was not able to keep going and he suffered a serious concussion and is on the way to the hospital to have final examinations. That’s why the delay happened because there was doubt between the broken nose and the concussion.”

There was eventually 14 minutes of added time at the end of the first half.

Under pressure from campaigners, Fifa have allowed an additional substitute to a team’s allotted five in the event of a concussion or suspected concussion.

The supposed “suspect and protect” mantra says that a player should come off if there is any suspicion of concussion but, amid the need for an off-field permanent decision, players often continue before later being forced off.

The big fear then is the potentially fatal impact of what is known as ‘second impact syndrome’ when a player suffers a second blow to the head in close proximity to the first trauma.

Professor Willie Stewart, the Glasgow neuropathologist who proved that former footballers are at a dramatically increased risk of dementia in later life, told Telegraph that football was still in the “stone age” with its management of concussion.

He says that permanent concussion substitutes, which have been introduced in both the Premier League and FA competitions, are “hopeless” and a “half measure”.

Luke Griggs, the interim chief executive of brain injury charity Headway UK, said that it was “an utter disgrace” to see Beiranvand initially stay on the pitch.

“It was irrelevant that he came off a minute later, he shouldn’t have stayed on for a second, let alone a minute,” said Griggs.

“He was clearly distressed and unfit to continue, this seems to be another case of the decision being made by the player and not medical staff.

“This was the first test of the Fifa World Cup concussion protocol and it was an abject failure.”

“We have seen a clear example on day two of the World Cup, in a globally televised game, how the current laws set by IFAB are jeopardising player health and safety,” said Dr Adam White, the PFA’s dementia lead.

“The reality of an in-game situation, is that it’s set against a backdrop of intense pressure. The medical teams, managers, and players are put in a position where they have to make a potentially game altering decision, in a limited timeframe.

“Players will invariably want to continue playing, they need protecting from themselves and should be removed from the decision-making process as much as possible.