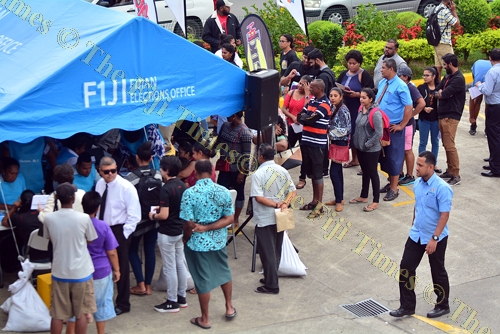 Fijians waiting to get registered at the FEO Voter Registration drive at Damodar City Centre in Suva. Picture: JOVESA NAISUA/FILE

The Fijian Elections Office will be giving away a cash prize of $300 as part of its Pre-Election Voter Survey launched in Suva yesterday, ahead of the 2022 General Election.

Supervisor of Elections Mohammed Saneem said this would encourage participation in the survey.

Mr Saneem said at the end of the project, all voters who participated would be entered into a draw.

He said six winners would walk away with $50 each.

The Pre-Election Voter Survey is anticipated to help the FEO in its preparations for the 2022 General Election by reaching out to its main stakeholders -the voters, and establish their their views and expectations when it comes to elections.

The FEO team will start the nationwide survey from Monday, January 24, and will end on February 11, 2022.