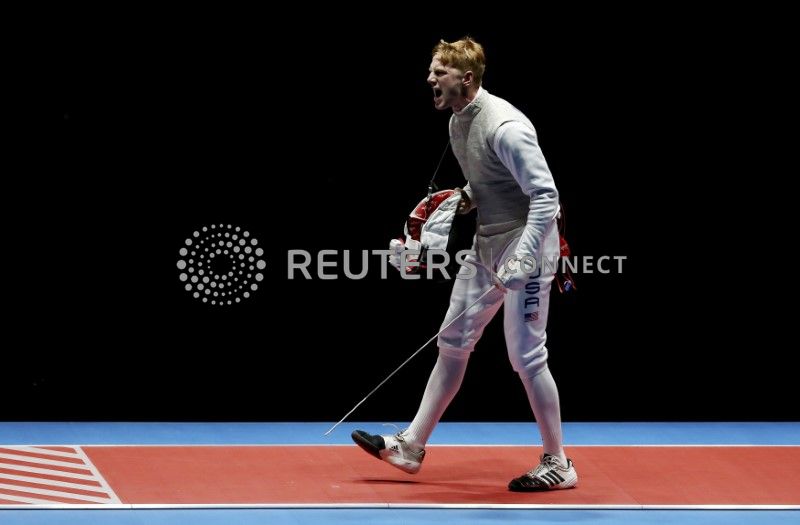 Part of the United States gold medal winning squad in the team foil event, Imboden dropped to one knee during Friday’s award’s ceremony as the U.S. flag in a political protest.

“We must call for change,” wrote Imboden. “This week I am honoured to represent Team USA at the Pan Am Games, taking home gold and bronze.

“My pride however has been cut short by the multiple shortcomings of the country I hold so dear to my heart. Racism, gun control, mistreatment of immigrants, and a president who spreads hate are at the top of a long list.

“I chose to sacrifice my moment today at the top of the podium to call attention to issues that I believe need to be addressed. I encourage others to please use your platforms for empowerment and change.”

Athletes taking a knee has become a way of protesting injustice in the United States.

Imboden’s protest contravened an agreement all athletes on the U.S. team signed that states they will not “make remarks or release propaganda of political, religious or racial nature, or any other kind” during the Games.

“Every athlete competing at the 2019 Pan American Games commits to terms of eligibility, including to refrain from demonstrations that are political in nature,” USOPC spokesman Mark Jones to Reuters in a statement.

“In this case, Race didn’t adhere to the commitment he made to the organising committee and the USOPC. We respect his rights to express his viewpoints, but we are disappointed that he chose not to honour his commitment.

“Our leadership are reviewing what consequences may result.”

It is unknown what discipline Imboden could face but could impact his chances of competing at next year’s Olympics, where protests of a political nature are also banned.