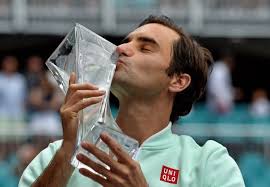 Mar 31, 2019; Miami Gardens, FL, USA; Roger Federer of Switzerland celebrates with the trophy after defeating John Isner of the United States (not pictured) during the men’s finals at the Miami Open at Miami Open Tennis Complex. Steve Mitchell-USA TODAY Sports

(Reuters) – Roger Federer defeated a hobbling John Isner 6-1 6-4 for his 101th career title at the Miami Open on Sunday.

Holder Isner struggled to continue late in the second set, hampered by pain in his left foot.

“It was a dream start, relaxing my nerves,” the Swiss said in a courtside interview.

But the American fought back in the second, leveling the set 3-3 and 4-4 before the pain made it difficult to continue.

Federer took the final two games for the victory.

Only American Jimmy Connors, with 109, has more career singles titles.

Even before the injury slowed Isner, Federer was the master, tempering Isner’s big serves and winning 32 of 35 points on his own serve.

Federer elected to receive to open the match and the strategy paid off as he broke Isner.

The American held on the third game but Federer took the next four.

Isner played much better in the second set, but in the end the pain became to much for him to mount an effective defense.