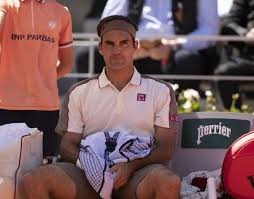 (Reuters) – Roger Federer was made to work hard by Jo-Wilfried Tsonga at the Halle Open on Thursday before he sealed a 7-6(5) 4-6 7-5 victory in the second round to continue his charge toward a 10th title at the grasscourt tournament.

The 20-times Grand Slam winner, who is using the tournament to prepare for next month’s Wimbledon championships, converted two out of four break points to come through a tight match in two hours and 16 minutes.

The 37-year-old Swiss, who has reached the Halle quarter-finals for a 17th time, next meets Roberto Bautista Agut who defeated Frenchman Richard Gasquet 6-1 6-4.

Germany’s Alexander Zverev, runner-up in 2016 and 2017, stayed in the hunt for a first Halle title with a 6-3 7-5 victory over Steve Johnson to set up a quarter-final against the unseeded David Goffin.

“I’m definitely happy with how things went,” Zverev, who withdrew from the doubles competition on Tuesday due to a knee problem, said.

“Obviously my knee is still swollen but the pain is much less than it was a few days ago. I hope when the swelling goes out it will be much better.”

Belgium’s Goffin, the 2017 ATP finals runner-up who has slipped to number 33 in the world, has lost his two meetings with second seed Zverev but both matches were played on clay.

Matteo Berrettini, who rallied past Italian compatriot Andreas Seppi 4-6 6-3 6-2, is seeking his third ATP title and second on grass following his success in Stuttgart last week.

Up next for Berrettini is Russian Karen Khachanov who has failed to defeat the big-hitting world number 22 in two previous attempts, including in the second round at Stuttgart.