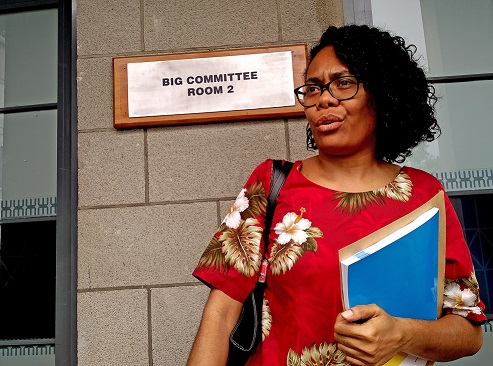 Vani Catanasiga after giving her submission to the Standing committee on Justice, Law and Human Rights in Parliament yesterday. Picture: JONA KONATACI

THE Fiji Council of Social Services (FCOSS) has called for the removal of a clause in the proposed Code of Conduct Bill that proposes to penalise complainants.

In presenting the organisation’s submissions on the Bill to the Parliamentary Standing Committee on Justice, Law and Human Rights, council executive director Vani Catanasiga requested the committee to review Part 4 of the Bill that focused on monitoring compliance and enforcement of the code of conduct, clause 12 sub clause 1a, b, c, d, g, and h and sub clause 4.

Ms Catanasiga claimed these provisions acted against openness which was a key tenet to fostering a culture of public integrity.

“Our suggestion would be remove the clauses completely, particularly clauses that propose to penalise complainants,” she said.

“FCOSS would like to suggest that these could be more effectively reflected in a complaints procedure at organisational or implementation level that vets complaints against a, b, c, d, g, h.

“However, sub clauses mentioned, in FCOSS views are counterproductive to this aim due to the fact that the Bill actually proposes to make it unsafe to report on suspected violations of integrity.

“This, FCOSS believes, fosters a climate of fear and doubt which undermines any attempts to build comprehensive public integrity systems such as what we believe this Bill attempts to do.

“FCOSS feels without these changes, the Bill falls short especially in building Fijian citizens’ trust and confidence in public institutions and in promoting integrity as a key pillar of economic and social wellbeing in the country,” she added.