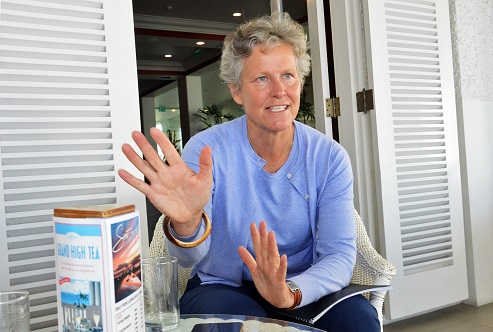 Asian Development Banks's Laure Darcy in an interview with The Fiji Times at GPH in Suva. Picture: ELIKI NUKUTABU

This is the sixth in the ADB’s Finding Balance series but the first to focus on state-owned banks. ADB’s SOE Reform/Pacific Private Sector Development Initiative (PSDI) team leader Laure Darcy said the report was a benchmarking study of state-owned banks to find out how the state-owned banks were faring compared with others in the region and to look at how best to place them on a longer term sustainable footing.

In this study the team looked at what the composition of the loan portfolio is, financial performance, are they profitable, the way they interact with the government, does the government impose certain non-commercial activities on the bank for which they don’t get compensated.

Ms Darcy says compared with the other development banks in the survey, the FDB achieves a positive return, it addresses some market segments that the commercial banks don’t address, such as agriculture and it’s a very positive finding which the team thinks some of the development banks around the region would look at with interest.

“We looked at an eight-year period in tracking their performance. And the key message we want to highlight is that there is no incompatibility in operating a state-owned enterprise as a commercial enterprise in whatever service it might be tasked to undertake,” she said.

Co-author of the report, PSDI senior financial sector expert Peter Dirou said it was important to clarify the role of the government-owned banks so that stakeholders were able to understand what job the bank was doing in terms of financing the risks that were not being financed by the commercial banks.

Mr Dirou said agriculture was an important sector for Fiji and its important that it’s financed in some way.

“One of the messages that come through in this report is that the role of the government and bank may change over time,” he said.

According to Mr Dirou the government-owned entity is used to fill that financial gap that wasn’t being taken up by the commercial banks but that gap may not exist in the next five years so that calls for a fresh way of thinking for government-owned banks.

“What Fiji is going through is the evolution of risk taking by financial institutions in Fiji so over time you can expect to see bigger equity markets or deeper markets, alternative ways of capital raising, peer to peer lending, crowd funding etc.”

Mr Dirou said countries had to be confident to find the approach and the business lines that suited the needs of that particular country.

“Second, there is no incompatibility necessarily between what we call development finance and commercial finance. The tension really is around how people perceive of a development financing agenda and whether that sits comfortably with the commercial orientation of state banks and we would say most definitely yes, they are compatible and through that emphasis on financial performance and profitability, that’s where the sustainability would come.”

The report is expected to be released next month.