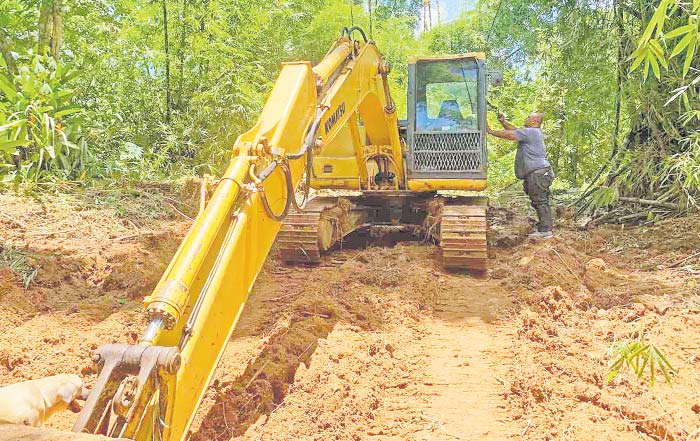 The excavator used to extract gravel from a creek in Wainadoi, Navua. Picture: SUPPLIED

The owner of a farm in Wainadoi, Navua, claims illegal gravel extraction caused $100,000 worth of damage to his property and resulted in erosion on the banks of a creek that runs through his property.

However, he said the excavation work had resulted in huge losses to investment in the area and the perpetrators needed to face up to what they had done.

“They only work during the night and when the morning comes, huge piles of gravel would be missing from the site,” he said.

Mr Punja claimed the rock lining he had constructed to prevent erosion had been damaged by the illegal extraction work.

He also claimed a fence near the creek where the illegal extraction was taking place had been removed to enable an excavator to access gravel.

Mr Punja said the damage done to his land was irrevocable and costly.

“I have spent $100,000 installing rock lining along the creek and now this is all damaged.”

He claimed what was once a pristine environment with clear waters was “now nothing more than a muddy stream”.

Mr Punja said he had written numerous e-mails to various ministries involved but to no avail.

“I e-mailed the Ministry of Lands and they told me to e-mail other ministries after assuring me they would look into the matter.”

He said the illegal extraction work which began in February has recently stopped but those involved must face the consequences for the illegal work they had done.

“I was visited by one government official who came to inspect the area but so far nothing has been done.

“After the farm fence was damaged, the sheep we keep have escaped and have not been retrieved.”

Farm caretaker Martin Amonaki claimed an excavator had crossed several private properties to get to the area where it carried out its illegal works.

Mr Punja said he planned to lodge a formal complaint with the police in a bid to begin legal action for compensation.