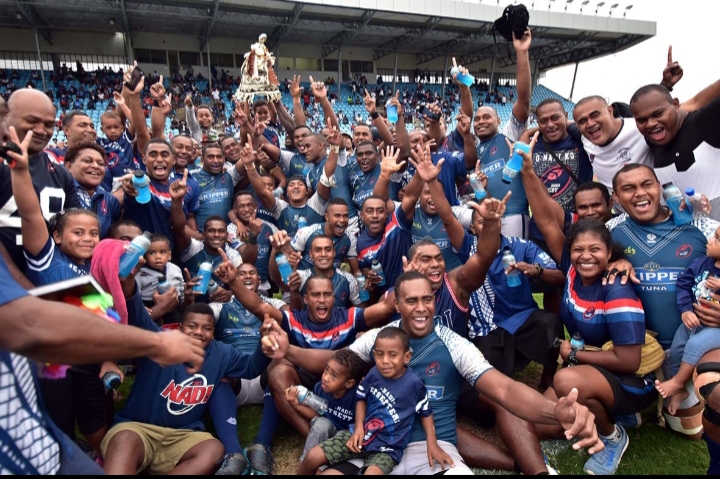 Nadi blindside winger Vilikesa Driu was the toast for his team after he scored the winning try for Nadi to upset Namosi and wrestle the Farebrother Sullivan trophy from them 22-21 at the ANZ Stadium in Suva.

Both teams were locked 7-all at the breather but as momentum grew in the second spell from both sides as Toga scored again for Nadi seven nminutes into the second half and convereted by first five eighth Vatemo Ravouvou taking them to the lead 14-7.

But Namosi came back strong to score their second try in the 55th minute from tight head prop Alivereti Rabukawaqa and convereted by Veitokani to level the scores again to 14-all.

With 20 minutes remaining, Nadi faced a huge blow when halfback Anasa Vuatalevu was red carded for foul play and Nadi had to play with 14 men in the last quarter of the second half.

That didn’t stop the Westerners from applying pressure on Namosi and forced many errors on the Nabukebuke team where Nadi was awarded a penalty and they went for the three points to close the gap to 21-17.

The final five minutes of play went to both sides but Nadi managed to control possession and pushed the Namosi defenders back until an advantage call from the referee for Nadi team in the Namosi 22metre line.

As the Namosi defenders focused on the open side, the ball went to the short side close to the lineout and the hero for Nadi team, Driu ran towards the try line and dived in the corner to score the winning try 22-21.

The Namotomoto lad said he dedicated the win to his father and three year old daughter.

Tailevu will be the next and final challenger next Saturday at Prince Charles Park in Nadi.