Farah in dispute with Gebrselassie over theft at Ethiopian’s hotel 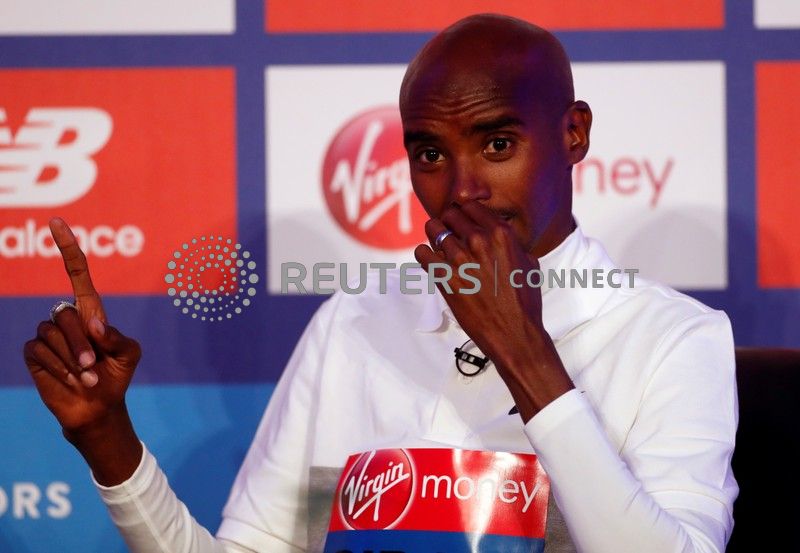 LONDON (Reuters) – Britain’s Mo Farah, who will be running in the London Marathon on Sunday, is in dispute with fellow distance-running great Haile Gebrselassie for failing to help him after he was robbed at a hotel in Addis Ababa owned by the Ethiopian.

Farah, third last year and facing a monumental challenge to overcome Kenya’s world record holder and defending champion Eliud Kipchoge in Sunday’s race, said around 2500 pounds ($3,230) – in four currencies – two mobile phones and a valuable watch presented to him by his wife were stolen from a locked suitcase in his room while he was out on a training run on his 36 birthday on March 23.

Farah said he got little help from hotel staff in dealing with the issue and even less from Gebrselassie, a national icon in Ethiopia after a stunning track career that earned him two Olympic golds and four world titles over 10,000m and several world records.

“He didn’t respond even though that’s his hotel,” four-times Olympic champion Farah told reporters at the London Marathon launch on Wednesday.

Farah was so furious that Gebrselassie ignored his repeated texts and calls that he shared the last he sent, that threatened to publicly shame the Ethiopian.

“I want to inform you that I’m disappointed you have not made any effort to find my stolen money, and especially my watch,” he wrote.

“I have tried to contact you by telephone several times. Know that I am not responsible for what I say during the press conference in London and what influence it will have on your personality and your business.” He signed off: “Sir Mo.”

Later on Wednesday Gebrselassie fired back at Farah in a press release, calling his claim of robbery “unproven”.

Gebrselassie said Farah declined to use a safe box offered to him or give the money to a hotel official for safekeeping.

Gebrselassie, a former world record holder and current president of the Ethiopian Athletics Federation, said the matter was immediately reported to police, who interviewed five hotel employees but decided not to bring charges against any of them.

“I found today’s accusations made by Mo with unproven premises, as an act of defamation on my hard earned reputation and business,” he said in a release posted on LetsRun.com. https://www.letsrun.com/news/2019/04/haile-gebrselassie-fires-back-at-mo-farah-accuses-him-of-disgraceful-conduct-says-sir-mo-attacked-a-married-athlete-in-hotel-gym

“Following this my lawyers will deal with the matter accordingly,” Gebrselassie said.

A spokesperson for Farah told the BBC late on Wednesday that he was disappointed with Gebrselassie’s statement.

“Mo disputes all of these claims, which are an effort to distract from the situation, where members of his hotel staff used a room key and stole money and items from Mo Farah’s room (there was no safe as it was faulty, and Mo requested a new one).

“Police reports confirm the incident and the hotel admitted responsibility and were in contact with Mo’s legal advisor.

“The hotel even offered to pay Mo the amount stolen, only to withdraw the offer when he prematurely left the hotel and moved to other accommodation due to security concerns.

“Despite many attempts to discuss this issue privately with Mr Gebrselassie, he did not respond but now that he has, we would welcome him or his legal team getting in touch so that this matter can be resolved.”

Farah will need all his focus to be back on the task in hand on Sunday as although the race is widely seen as something of a head-to-head between him and the peerless Kipchoge, the Briton is only the eighth-fastest man in the field and his best of 2:05.11 is almost four minutes adrift of Kipchoge’s astonishing world record of 2:01.39, set in Berlin.

The Kenyan, who has won 10 of his 11 marathons, including the 2016 Olympic Games, is seeking an unprecedented fourth London win and would need to have something of an off-day to open the door for any of his rivals, but Farah said he was not turning up “expecting to finish third or fourth.”

“You look up to these guys, you have to learn from the best and I have learned from each race I’ve done,” he said.

“I think I could have gone 2.04-something in Chicago (where he set a European record of 2:05:11 while winning last year) but it was about winning the race.

“Last year in London when Eliud increased the pace at around 20 miles I went with it a bit but just felt tired and in my mind I felt ‘I cant keep that going’ and you end up taking it back a notch. But I am here to race and will give 100 percent as I always do.”

Farah said he had underestimated the volume of training required to convert his track speed into the extra endurance needed for 26.2 miles on the road, but that he was enjoying the challenge.

“The most important thing is that I’m happy and enjoying it,” he said. “I’m still hungry, I feel like I’ve got my mojo back.”

While Farah and Kipchoge fight it out at the sharp end, around 40,000 others will be pounding the streets of London behind them in what organisers say is the world’s most popular race.

“We had 415,000 applications in five days,” said race director Hugh Brasher. “This weekend we will reach one billion pounds raised for charity by runners, with more than half of that coming in the last nine years.”

In the first race in 1981, co-founded by his father and former Olympic gold medallist Chris Brasher, five percent of finishers were female, while this year that figure is expected to be around 45 percent.