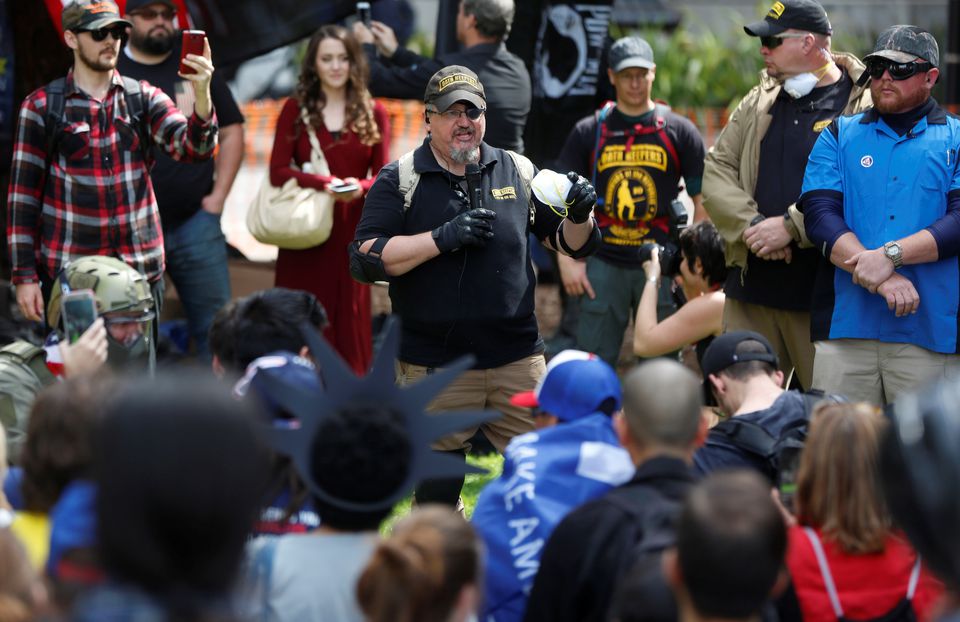 WASHINGTON, Jan 13 (Reuters) – U.S. prosecutors on Thursday charged the founder of the far-right Oath Keepers militia, Stewart Rhodes, and 10 alleged members of the group with seditious conspiracy for their role in the deadly Jan. 6, 2021, attack on the Capitol.

They said Rhodes had warned his group to prepare for a “bloody and desperate fight” in the days leading up to the assault, when supporters of then-President Donald Trump tried to stop Congress from certifying his election defeat.

This is the first time alleged participants in the attack have been charged with seditious conspiracy, which is defined as attempting “to overthrow, put down or to destroy by force the government of the United States.”

“We are going to have a fight,” prosecutors said Rhodes told his allies on the messaging app Signal. “That can’t be avoided.”

The Oath Keepers are a loosely organized group of activists who believe that the federal government is encroaching on their rights, and focus on recruiting current and former police, emergency services and military members.

Nine of the eleven charged with seditious conspiracy were already facing other charges relating to the Capitol attack. Members of the far-right Proud Boys and Three Percenters have also been charged with taking part in the attack.

ATTEMPT TO STOP TRANSFER OF POWER

The indictment says Rhodes started sending messages to his followers in November 2020, the month of Trump’s election loss to Democrat Joe Biden, encouraging them to “oppose by force the lawful transfer of presidential power.”

After his defeat, Trump repeatedly made false claims that his loss was a result of widespread fraud. He repeated those claims in a fiery speech near the White House before thousands of his followers stormed the Capitol in the worst attack on the seat of Congress since the War of 1812.

Prosecutors said that beginning in late December 2020, Rhodes used private encrypted communications to plan to travel to Washington on Jan. 6. He and others planned to bring weapons to help support the operation, prosecutors said.

While some of the Oath Keeper members rushed inside the building wearing tactical gear, others remained outside in what they deemed “quick-response force” teams, which were prepared to rapidly transport arms into the city, prosecutors said.

Jon Moseley, an attorney for Rhodes, told Reuters he was on the phone with Rhodes to discuss his planned appearance before the House Select Committee on Jan. 6 when the FBI called.

“He patched me in on the call and I identified myself as his lawyer,” Moseley said in an e-mail. The agent then told him they were outside Rhodes’ home in Granbury, Texas, and were there to arrest him.

The indictment alleges that Thomas Caldwell, who was previously charged, and Edward Vallejo of Arizona, a new defendant, were in charge of coordinating the quick-response force teams.

Seditious conspiracy is a felony carrying a maximum sentence of 20 years in prison.

U.S. Attorney General Merrick Garland last week vowed to hold accountable anyone involved in the attack on the Capitol. The department has charged more than 725 people with crimes arising from the attack. Of those people, about 165 have pleaded guilty and at least 70 have been sentenced. Garland said the Justice Department would “follow the facts wherever they lead.”

On the day of the attack, four people died. One of them, Ashli Babbitt, was shot dead by Capitol Police while trying to break into the Speaker’s Gallery. Three others died of natural causes.

The following day, Capitol Police Officer Brian Sicknick died. Although he had been sprayed with a chemical irritant the day of the attack, it was later determined he died of natural causes. Around 140 police officers were injured, and four police officers later died by suicide.

After a two-month trial, a jury acquitted all defendants.