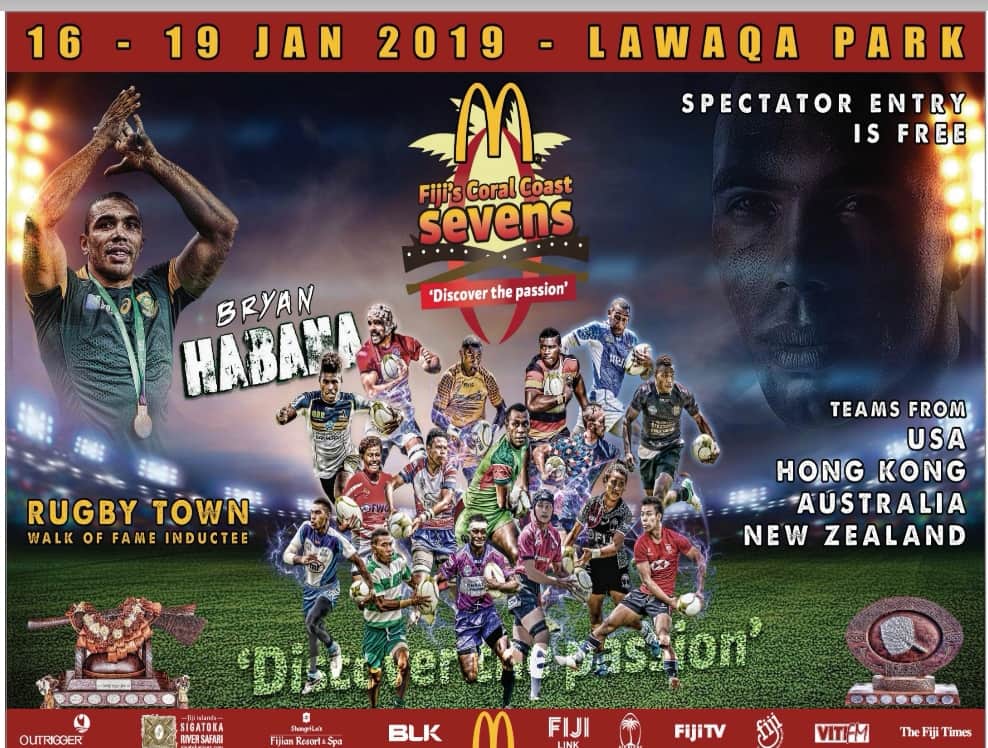 RUGBY fans are bracing for the much anticipated 7s tournament in Fiji where they also have the lifetime opportunity of meeting their rugby idols.

Since the Coral Coast 7s inception eight years ago, the McDonald’s-sponsored event has brought rugby superstars to for the fans to meet such as David Campese, Waisale Serevi, the late Jonah Lomu, Karl Te Nana, George Gregan, DJ Forbes and Lote Tuqiri.

This is apart from the rugby officials such a Rasta Rashivenge, legendary commentators Keith Quinn and Sean Maloney.

This year the fans will have the opportunity to meet South African rugby legend Bryan Habana.

Tournament founding chairman Jay Whyte said they not only attracted rugby starts it also provide quality competition – making the event the most competitive tournament and richest in the country. He said the prize pool for this year would be around $40,000 with a total of 44 teams featuring in three different competition. “The prize pool will be approximately $40k with 16 men’s, 12 women’s and 16 youth teams,” said Whyte.

“We have seen the standard rise in 7s in Nadroga and Fiji as a whole and based on the level of interest and teams wanting to participate, they see the McDonald’s Fiji Coral Coast Sevens as the penultimate sevens crown in Fiji.

As stated to us, “when a team wins the Coral Coast 7s they are the champions of Fiji”. “We are very proud to have been the catalyst for many other tournaments in Fiji following our lead by including the under-19s category which we began back in 2016. This division is fiercely contested and provides a true player pathway for the next generation of Fijian 7s stars.”

“Sean Maloney who is the world 7s series commentator is coming back for his third McDonald’s Fiji Coral Coast Sevens and we are hopeful that Lote Tuqiri will be with us.

“There have been tremendous anticipation and eagerness for the 9th annual McDonald’s Fiji Coral Coast Sevens which will feature the best of the best all vying to win the i-Wau trophy.

“We always look forward to the week- long 7s festival that is simply the best in the South Pacific. Featuring the best players and up and coming stars in all divisions, i.e. men’s, women’s and youth.”

“Bryan Habana is our tournament ambassador who is being sponsored in his trip to Fiji by Sigatoka River Safari and will be here for the first time ever from his home in Cape Town, South Africa. Joining the long list of rugby legends who have been inducted into the Rugbytown Walk of Fame such as David Campese, Waisale Serevi, Jonah Lomu, Ben Gollings, Vili Satala, Karl Te Nana, George Gregan, Lote Tuqiri, Rio Olympic 7s team and DJ Forbes.”

The tournament will be held at Lawawa Park from January 16-19.