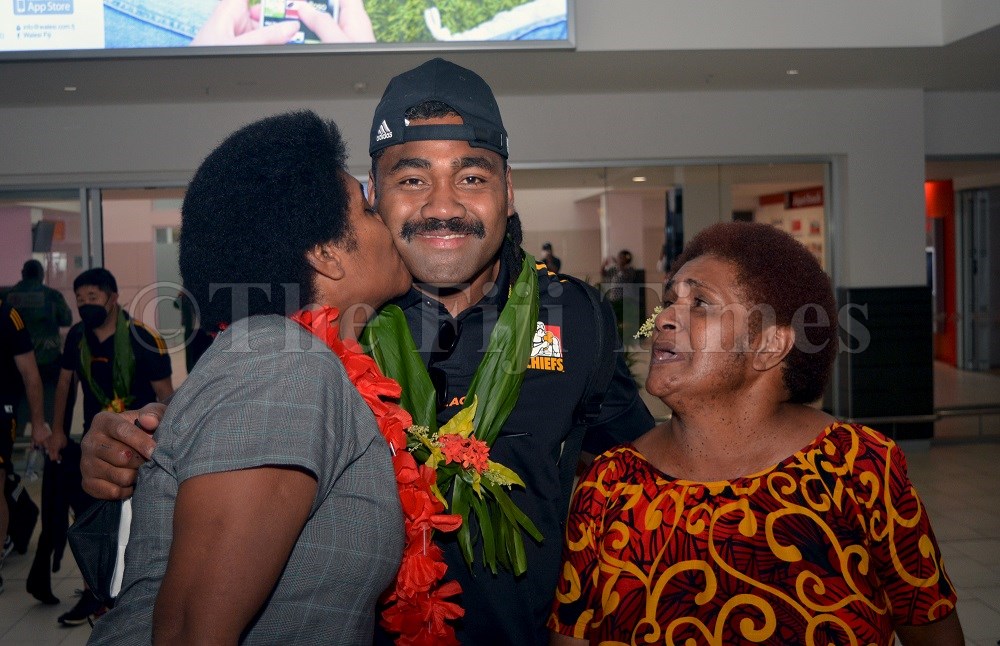 Pita Gus Sowakula is greeted by his mother Anaseini Sowakula, left, as his aunty Lavenia Adikovea looks on at the Nadi International Airport. Picture: BALJEET SINGH

When Pita Gus Nacagilevu Sowakula runs out for the Chiefs on to Churchill Park against the Swire Shipping Fijian Drua tomorrow, he will have his family behind him to cheer him on.

Waiting for his arrival at the Nadi International Airport yesterday, his mother Anaseini Sowakula and aunt Lavenia Adikovea prepared garlands for the Chiefs team and were in high spirits.

Adikovea brought Sowakula up on the outskirts of Tagaqe village and said they had always supported him in whatever sport he took part in.

“We are always excited to watch him play and would never miss any of his games,” she said.

“We have been looking forward to this match when it was announced four weeks ago knowing that we will get to watch him play live.

“We have family members coming from all across Viti Leyu and Yasawa to watch Pita play and we will come in Chiefs colours.”

Speaking to The Fiji Times in an exclusive interview yesterday, Sowakula said it meant the world to him seeing his family members at the airport. “It really means the world to me seeing them come out in numbers to welcome us,” he said.

“It is a pretty special feeling to come home and play in front of my family. I have not seen them for more than 2 years.”

Sowakula mentioned how supportive his family was in his rugby journey.

“I always know they will support me wherever| go and play. They were the loudest at the ANZ Stadium two-years ago and 1 am sure it will be the same scenario at the game on Saturday. They have always been like that and I am sure the whole Nadi Airport witnessed it today (yesterday),” he jokingly added.

Sowakula knows the Drua will come firing tomorrow and expects a tough match.

“It will be a very entertaining, physical and brutal match. They will come firing and I know they will play their best since it is their last game and they are playing at home.”