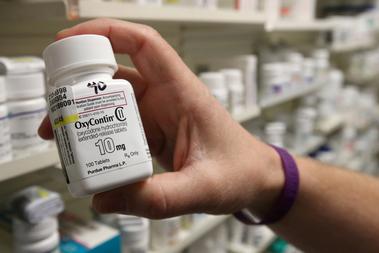 FILE PHOTO: A pharmacist holds a bottle OxyContin made by Purdue Pharma at a pharmacy in Provo, Utah, U.S., May 9, 2019. REUTERS/George Frey/File Photo

Supporters of Purdue’s plan to restructure under terms of a settlement the company values at more than $10 billion include 24 states and five U.S. territories, as well as lead lawyers for more than 2,000 cities, counties and other plaintiffs suing the company and, in some cases, its controlling Sackler family.

On the other side are two dozen states that remain opposed or uncommitted to the proposed settlement, setting the stage for contentious legal battles over who bears responsibility for a public health crisis that has claimed the lives of nearly 400,000 people between 1999 and 2017, according to the latest U.S. data.

Purdue and the Sacklers have denied allegations in lawsuits alleging they aggressively marketed addictive prescription painkillers while misleading doctors and patients about their abuse and overdose risks.

The following are among the key legal battles ahead, pitting states such as Massachusetts, New York and Connecticut against Purdue and the Sacklers.