Factbox: How will Britain allocate its seats to the European Parliament? 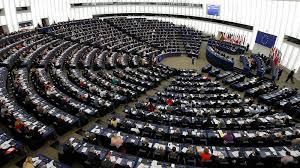 LONDON (Reuters) – The European Parliament election in Britain on May 23 is expected to show the polarization of views over Brexit, with strongly pro-Brexit and pro-EU parties gaining at the expense of the governing Conservatives and opposition Labour Party.

Below is an explanation of the D’Hondt system, which is used to allocate seats in most of the United Kingdom, and many other EU countries, and the impact it could have:

HOW WILL BRITONS VOTE?

The United Kingdom is divided into 12 electoral regions – nine in England, and one each for Scotland, Wales and Northern Ireland. In total it will elect 73 MEPs (Members of the European Parliament).

Parties submit a list of candidates for each region, and voters select a party rather than an individual candidate. As the seats are allocated to a party, they in turn allocate them to candidates starting from the top of their list.

Britain is taking part in the elections because it delayed the date of its exit from the EU, but its MEPs will leave the parliament when Brexit happens. If Britain has left the EU by the end of June, the MEPs will not take up their seats.

WHAT IS THE D’HONDT SYSTEM?

HOW DOES IT WORK?

1) The party with the largest number of votes in a region is allocated a seat.

2) The winning party’s total number of votes is then divided by two (the number of seats they have been allocated, plus one).

3) The vote counts are reordered and whichever party now has the most votes is allocated the next seat.

WHAT IMPACT COULD IT HAVE ON THE RESULTS?

The D’Hondt system is considered less proportional than some other methods.

This could favor the pro-Brexit side, as voters who are strongly pro-Brexit are largely expected to support Nigel Farage’s Brexit Party. On the “remain” side however, the vote will be splintered between several strongly pro-EU parties: the Liberal Democrats, Change UK and the Green Party.

So even if the total number of votes cast for pro-EU parties collectively was similar to the Brexit Party, the number of seats they end up being allocated would likely be much lower as their vote is divided across several parties.

The Brexit Party has maintained a big lead over both the Conservatives and Labour in polls on voting intentions.