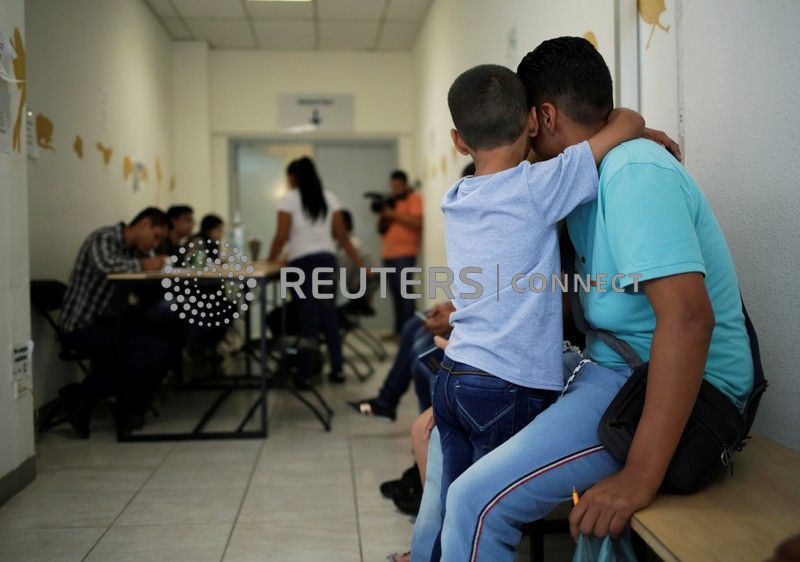 A man and his son from El Salvador wait for a turn to apply for U.S. asylum at the premises of the state migrant assistance office in Ciudad Juarez, Mexico, July 15, 2019. REUTERS/Jose Luis Gonzalez

Number 12,026 – better known as Marcial Artigas, 33, from Holguin, Cuba – waited nervously at a migration office at the U.S.-Mexico border as a Mexican official called out numbers from a long list of hopefuls waiting to cross to the United States.

Artigas said he was praying his number would be called next, before a new U.S. policy announced on Monday enters into force that bars almost all immigrants from applying for asylum at the country’s southern border.

The Trump administration’s interim rule, set to take effect Tuesday, requires asylum-seekers to first pursue safe haven in a third country through which they travelled en route to the United States.

The former cafeteria worker said he left Cuba in February, travelling to Nicaragua by plane before heading north through Central America and into Mexico by bus. If the new policy sticks, he could be required to apply for asylum in Mexico, or any one of the countries he passed through en route.

He had been waiting his turn to cross to El Paso, Texas, from Ciudad Juarez since mid-April, joining a line of thousands, according to officials and a list of asylum-seekers the city keeps.

By 9.20 a.m, the official calling out numbers from the National Migration Institute’s Grupo Beta unit had read out 10. He reached number 12,025 and called it a day.

As the other migrants clapped, number 12,025 rose, pumped his fist, and followed the official to cross to the United States to begin his asylum process.

Artigas was wearing a black backpack stuffed with clothing and other essentials, ready to leave Mexico behind for good. If he felt despair at falling a single digit short, the Cuban remained stoic.

He hoped there would be another round of numbers called that afternoon at the migration office, he said.

Still, he said, the constant shifts in U.S. policy made him feel annoyed that while he was playing by the rules, people who crossed illegally and then requested asylum were at an advantage.

“One is here patiently doing things as they should be done,” he said. “There are people who go illegally.”

Beside him, most of the nearly two dozen migrants at the office, in the shadow of the bridge connecting the two counties, appeared not yet to have heard about the newest U.S. policy.

If they had, they appeared unsure about what it might mean for their asylum chances.

Carolina Puente, 35, still had a crushing wait ahead. At number 17,243, hundreds more were scheduled to cross ahead of her, she said.

“I’m desperate,” she said. “Desperate is the word.”

Puente said she had fled violence in Quito, Ecuador, and moved to Cuba two years ago, to live with her husband’s family. But in Cuba she faced poverty and a lack of economic opportunities.

Since June 24, she had been renting a house in Ciudad Juarez. But she said she had little faith in Mexico, which is racked by drug-related violence and high murder rates and notoriously unsafe for migrants.

“This country has opened the doors for us, but it’s an unsafe country,” she said.

Enrique Valenzuela, head of COESPO, the state population commission which oversees the centre for migrants in Ciudad Juarez, said he had no prior knowledge of the new U.S. measure, having learned about it on television.

The number of people adding themselves to the asylum list in Ciudad Juarez had been dropping this month and last, he said.

But if the new policy holds, he said, “The number of (asylum) applicants will rocket in Mexico.”