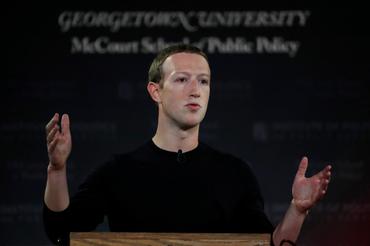 While delivering an address on free speech at Georgetown University in Washington, Zuckerberg said Facebook social media platforms like WhatsApp were used by protesters and activists everywhere because of its encryption and privacy protection.

But “on TikTok, the Chinese app growing quickly around the world, mentions of these same protests are censored, even here in the U.S.,” he said.

TikTok denied China censors its content, saying it is “not influenced by any foreign government.”

Facebook competes directly with TikTok, especially among younger audiences. The app enable users to create and share short singing and dancing videos that are set to well-known songs, with numerous special effect filters.

Zuckerberg, in a recently leaked recording of him speaking with company employees, noted that TikTok was the first successful Chinese internet product worldwide. “It’s starting to do well in the U.S., especially with young folks.”

In a letter requesting the review, Rubio noted that despite Hong Kong protests dominating international headlines for months, “the app only had a few videos” of the protests.