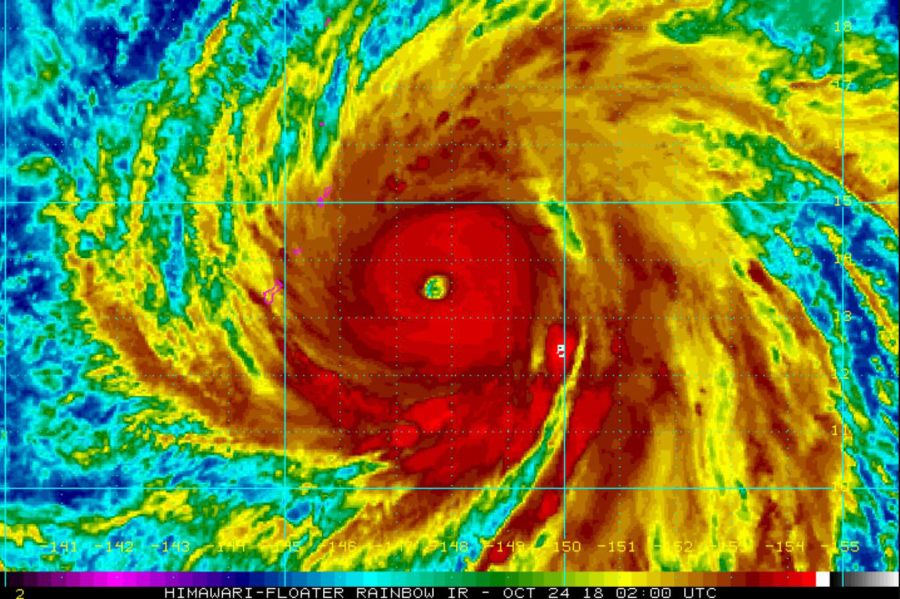 SAIPAN, 25 OCTOBER 2018 (THE WASHINGTON POST) – Super Typhoon Yutu, tied for the strongest storm anywhere in the world in 2018, slammed into the U.S. commonwealth of the Northern Mariana Islands on Thursday, with weather agencies predicting extreme destruction.

The storm, with sustained winds of 180 mph, was set to create “devastating damage” in the Pacific islands east of the Philippines, said the National Weather Service in Guam. Much of the island of Saipan and all of the island of Tinian were enveloped within the eye of the gigantic cyclone as residents hunkered down in the early hours of the morning.

Frank Camacho, a photographer from Saipan who was on nearby Guam when the storm hit, stayed in touch with family and friends via WhatsApp and relayed to the Post what they were experiencing.

“Massive flooding in homes, roofs being blown off, storm shutters flying off concrete buildings, buildings being leveled, and the storm is still hitting in the 70-100 mph range,” Camacho said in an email as dawn rose on October 25 local time on the islands. “My sister just lost her whole house on Saipan…. [People] hiding in their bathrooms as the eye passed over the islands.”

While a full picture of the damage was not yet clear, the weather serviced tried to warn residents that the winds would be so strong that “most homes will sustain severe damage with potential for complete roof failure and wall collapse. Most industrial buildings will be destroyed.”

The governor’s office of the Mariana islands called on residents to “shelter in place.” Local news media in Saipan, the Mariana capital, reported that emergency shelters had been quickly filled and more shelters were opened to accommodate additional refuge seekers.

The Northern Marianas, which the United States took from Japan after World War II, are home to 52,000 people, the majority of whom are U.S. citizens or U.S. nationals. Tinian, the island at the center of the storm, was the site from which the B-29 missions to drop atomic bombs on Hiroshima and Nagasaki were launched.

The Commonwealth of the Northern Mariana Islands used to be home to dozens of garment factories, in part because the territory was exempt from federal minimum wage requirements along with quotas and tariffs on U.S. textile imports. The industry collapsed a decade ago, after the tariffs and quotas expired and Congress passed a law raising the islands’ minimum wage. The value of its textile exports to the United States fell from US$1.1 billion in 1998 to “near zero in 2010,” according to a 2017 Government Accountability Office report, as operations shifted to elsewhere in Asia.

The territory has been largely dependent on foreign workers. Tourism ranks as a major pillar of the local economy, and a relatively new casino on Saipan has spurred considerable construction in recent years.

While the Mariana Archipelago consists of 15 separate islands, roughly 90 percent of the territory’s residents live on Saipan, which was severely affected by Yutu. Some 6 percent live on the island of Tinian, which was struck most directly.

The islands are yet another U.S. territory to have been pummeled by a strong hurricane in the past two years. The U.S. Virgin Islands and Puerto Rico suffered calamitous strikes in the 2017 hurricane season, and Guam was recently struck by Typhoon Mangkhut.

The extreme strike occurred with little warning, as the storm strengthened from Category 1 to Category 5 intensity in just a day’s time shortly before landfall. The maximum sustained wind speed increased by 80 mph over that time, creating a storm with gusts exceeding 200 mph.

Scientists have recently suggested that such dangerous “rapid intensification” events, which also happened with hurricanes Michael and Florence, may become more common as the planet warms and the oceans heat up, providing additional fuel for storms.

Yutu, which stands for the “Jade Hare,” according to the Hong Kong Observatory, is tied for the strongest storm of the year with Typhoon Mangkhut, which also reached winds of 180 mph, at the higher end of Category 5 strength. In general, the northwest Pacific, where tropical cyclones are referred to as typhoons (not hurricanes), sees the most numerous and strongest storms on the planet.

President Trump declared a disaster in the Marianas on Tuesday, and the Guam Daily Post reported that additional Federal Emergency Management Agency personnel, who had been on nearby Guam because of Mangkhut, would be deployed to the Marianas. FEMA did not immediately respond to a request for comment but tweeted that the agency is “monitoring Typhoon Yutu and coordinating with local authorities.”

The U.S. Army Corps of Engineers said that it had “generators pre-staged for Yutu at nearby locations — 77 generators in Guam, 1 generator at a Rota Hospital, and 85 additional generators in Hawaii.”

Interior Secretary Ryan Zinke, whose department has responsibility for U.S. territories, recently visited the Marianas as part of a broader trip to the Pacific. During the trip, according to the Guam-based Pacific Daily News, Zinke said of climate change: “If it is a priority in the Pacific, then it becomes our priority too.”

Asked Wednesday about Interior’s response to the current threat facing the territory, department officials did not respond immediately.