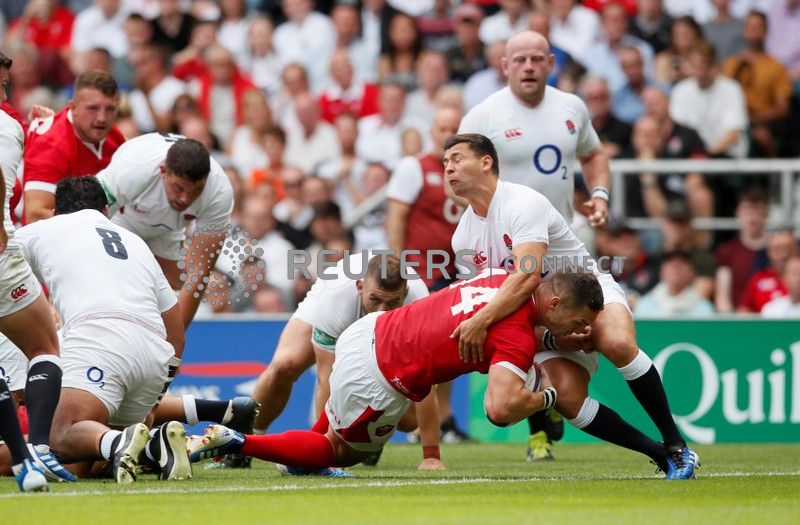 LONDON (Reuters) – An experimental England squad beat a strong Wales team 33-19 at Twickenham on Sunday, as the hosts followed a typically abrasive first-half lead with a composed second half performance.

An England line-up featuring only a handful of regular first-choice starters overpowered Wales thanks to tries from Billy Vunipola, Joe Cokanasiga and Luke Cowan-Dickie, as well as flawless kicking from captain and flyhalf George Ford.

“We ripped in together, it wasn’t perfect but we found a way. We want to start building a winning mentality, there’s still lots to work on,” Ford said.

The visiting Grand Slam winners struggled for attacking cohesion throughout, despite tries for Gareth Davies, George North and Wyn Jones, and compounded their woes with an injury to flyhalf Gareth Anscombe.

Debutant Willi Heinz was among a number of fringe England players that advanced their claims for inclusion in the World Cup squad that coach Eddie Jones will name on Monday, with the New Zealand-born scrumhalf offering a mix of control and sharp running.

Flanker Lewis Ludlam and centre Jonathan Joseph were also prominent, with the latter making his case for the competitive outside centre shirt with a number of trademark side-stepping breaks.

England play three more warm-up matches — away to Wales and at home against Ireland and Italy — before heading to Japan, where they kick off their campaign against Pool C opponents Tonga on Sept. 22.

England’s only concerns from Sunday’s game will be the fitness of flanker Tom Curry, who impressed before limping off early, and their habit of conceding clusters of penalties.

Wales, meanwhile, will need to regroup ahead of the return fixture in Cardiff on Saturday, and work out how a defence that only conceded seven tries in the whole Six Nations and rarely left gaps was pierced so regularly by England.

The two sides could face each other in the World Cup quarter-finals in October.