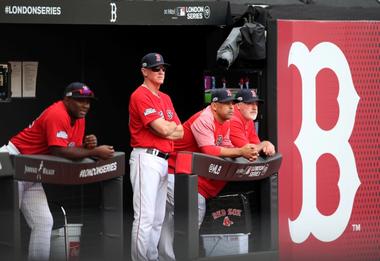 Whether the Boston Red Sox’s 2018 World Series title was won legitimately is up for debate after Alex Cora was involved in sign-stealing scandals in back-to-back seasons with the 2017 champion Houston Astros and Red Sox.

The Red Sox held a press conference on Wednesday — one day after parting ways with Cora — and team president Sam Kennedy made it clear he doesn’t believe the World Series win over the Los Angeles Dodgers is tainted.

Kennedy was asked, “Do you believe you beat the Dodgers fairly and squarely?”

Cora was identified by MLB on Monday as a ringleader in the Astros’ scheme to steal signs en route to their 2017 World Series championship, when he was Houston’s bench coach. He became the Red Sox’s manager the next year and led his new team to the title — albeit with lingering suspicions regarding similar illegal sign-stealing.

On Monday, MLB announced major sanctions against Houston, including one-season suspensions for manager A.J. Hinch and general manager Jeff Luhnow, who were subsequently fired by the Astros.

On Tuesday, Red Sox brass met with Cora and all parties agreed that parting ways was necessary.

“Alex by his own admission, and we agreed, played a central role in what went on in Houston and we all agreed that it was wrong and that we had a responsibility as stewards where that sort of behavior is unacceptable,” Red Sox chairman Tom Werner said during the press conference.

Werner requested that the team’s fans withhold judgment on the 2018 team until the investigation is complete.

Kennedy said that it wasn’t anything that occurred in Boston that led to Cora no longer being the manager.

“It is also important to recognize that this collective mutual decision yesterday was related exclusively to the incidents that took place in Houston,” Kennedy said. .”.. Alex came to the conclusion that he could not effectively lead the organization going forward in light of the commissioner’s findings and the ruling and we came to that conclusion as well.”

While Cora was tabbed as the ringleader of the sign-stealing scheme in Houston, also mentioned was then-player Carlos Beltran, who was recently hired to be manager of the New York Mets.

The Mets haven’t indicated how they plan to handle the situation with Beltran at a time when Cora and Hinch have lost their jobs.

ESPN analyst Mark Teixeira, a former teammate of Beltran on the New York Yankees, says Beltran has to go.