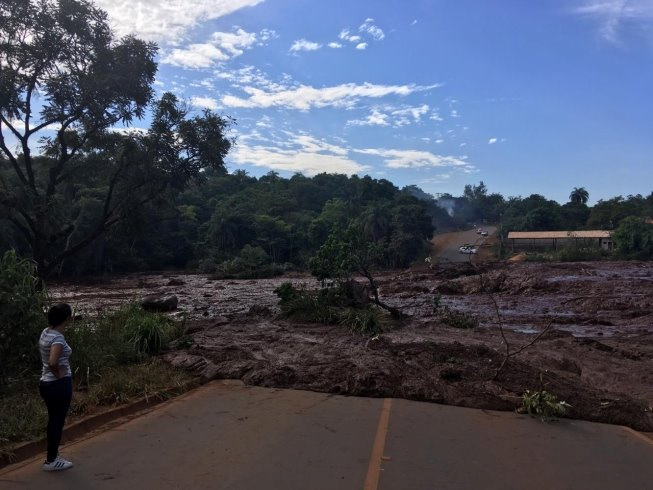 A general view of the aftermath from a failed iron ore tailings dam in Brumadinho, Minas Gerais, Brazil January 25, 2019 in this image obtained from social media January 26, 2019 via Reuters. Jornal Hoje em Dia via REUTERS

RIO DE JANEIRO (Reuters) – The Brazilian prosecutor running talks to settle a lawsuit over a 2015 tailings dam rupture at the Samarco mine told Reuters on Saturday that a deadly dam burst on Friday at a mine run by Vale SA (VALE3.SA) could scramble those sensitive negotiations.

Federal prosecutor Jose Adercio Sampaio said that depending on Vale’s culpability in the new disaster, it may change how his task force handles a 155 billion reais ($41 billion) case against Samarco Mineracao SA, a Vale joint venture with BHP Group (BHP.AX). That case is currently suspended amid negotiations for a potential settlement.

“Now an intervening fact has appeared and that may completely change the course of those talks,” Sampaio said in a telephone interview.

On Friday, a burst tailings dam at a Vale mine in the town of Brumadinho, about 100 kilometers (62 miles) west of the Samarco complex, sent a torrent of mud tearing through the miner’s facilities and left hundreds missing.

“We need to investigate what caused this new rupture, if there were the same causes as the Samarco case: a lack of monitoring, incomplete information, neglect,” Sampaio said.

Vale, BHP and Samarco did not immediately respond to requests for comment.

The new disaster at the Vale mine drew immediate parallels to the Samarco disaster, which involved the collapse of a larger dam that killed 19 people, buried a village and poured toxic waste into a major river near the town of Mariana.

Sampaio said state and federal authorities have also failed to apply more stringent regulation to the hundreds of tailings dams around the country.

“When it comes to the safety policy for these dams, nothing – absolutely nothing – has changed,” Sampaio said. “We’re going to see one tragedy after the other.”

Sampaio said he has contributed to prosecutors’ work so far on the new disaster, and over the weekend prosecutors will decide whether to create a new task force or expand the scope of the Samarco team.