Ex-House of Commons leader Leadsom enters race to be next British PM: media 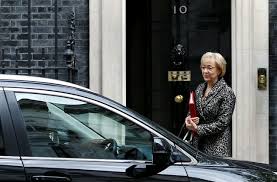 FILE PHOTO: Britain's Conservative Party's leader of the House of Commons Andrea Leadsom is seen outside Downing Street, as uncertainty over Brexit continues, in London, Britain May 7, 2019. REUTERS/Henry Nicholls

(Reuters) – Former House of Commons leader Andrea Leadsom will enter the race to be leader of UK’s Conservative party and replace Theresa May as prime minister, British media reported on Saturday, citing a confirmation from Leadsom.