Ex-Chelsea and England captain Terry hangs up his boots 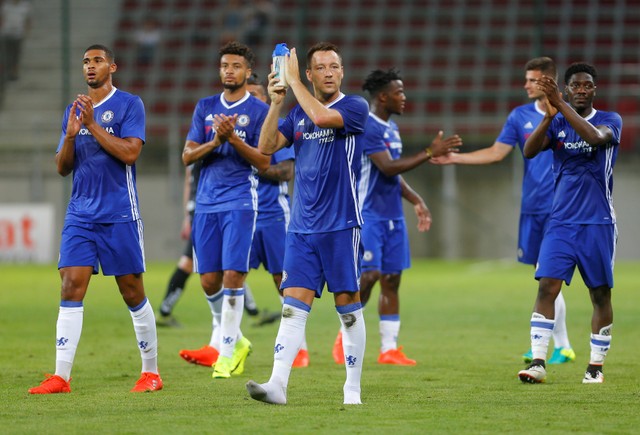 LONDON (Reuters) – Former Chelsea and England captain John Terry has decided to call time on his playing career after 23 years in the game.

The central defender has been without a club since leaving Championship (second-tier) side Aston Villa following their playoff defeat by Fulham at Wembley Stadium last season.

“After 23 incredible years as a footballer, I have decided now is the right time for me to retire from playing,” Terry, 37, wrote on his Instagram account on Sunday.

He has been linked by British media with a managerial role at Villa Park as the number two to former Arsenal and France forward Thierry Henry following the sacking of Steve Bruce on Wednesday, with Villa now struggling in 15th place.

Terry also won both a Champions League and Europa League winners’ medal although he did not appear in either final, having been suspended for the 2012 European Cup triumph and injured for the Europa League success the following year.

After he announced his retirement, Chelsea wrote on Twitter: “Twenty-two years as a Blue. Fifteen major trophies. One of the finest careers of any Englishman in the history of the game. Enjoy your retirement, JT.”

Terry joined Chelsea in 1995 and made his England debut in June 2003, with Jose Mourinho making him captain at Stamford Bridge when he took over as manager in 2004. Terry captained his country 34 times after first taking the armband in 2005.

“As a 14-year-old, I made my best and biggest decision: to sign for Chelsea Football Club,” he added in his Instagram post. “Words will never be enough to show how much everyone at the club means to me, in particular the fans.”

Terry was reluctant to leave Chelsea but took up the challenge of trying to lead former European champions Villa back to the top flight, just missing out in the Wembley playoff.

“I also want to say a huge thank you to Aston Villa for giving me the opportunity to play at such a big club and captain it throughout the 2017/18 season,” he added on Sunday.

“It was a privilege to represent such a renowned football club with great fans.

“I look forward to the next chapter in my life and the challenges ahead.”