Ex-Angels 1B Bour to play next season in Japan 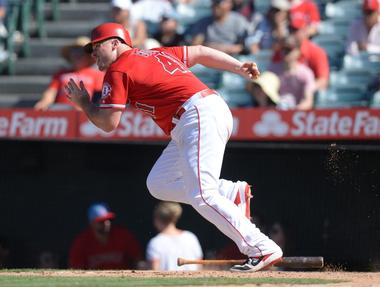 Veteran first baseman Justin Bour has agreed to play next season with the Hanshin Tigers in Japan, according to a report from the Japan Times.

The 31-year-old Bour is coming off a difficult season in which he hit .172 with eight homers and 26 RBIs in 52 games with the Los Angeles Angels. He became a free agent at the end of the season.

Bour has belted 92 career homers over parts of six seasons with the Miami Marlins, Philadelphia Phillies and Angels. The left-handed slugger has an .833 on-base plus slugging percentage against right-handers, but his OPS plummets to .630 against southpaws.

Hanshin wanted to boost its lineup after finishing last in runs scored in Japan’s Nippon Professional Baseball league, according to the newspaper.