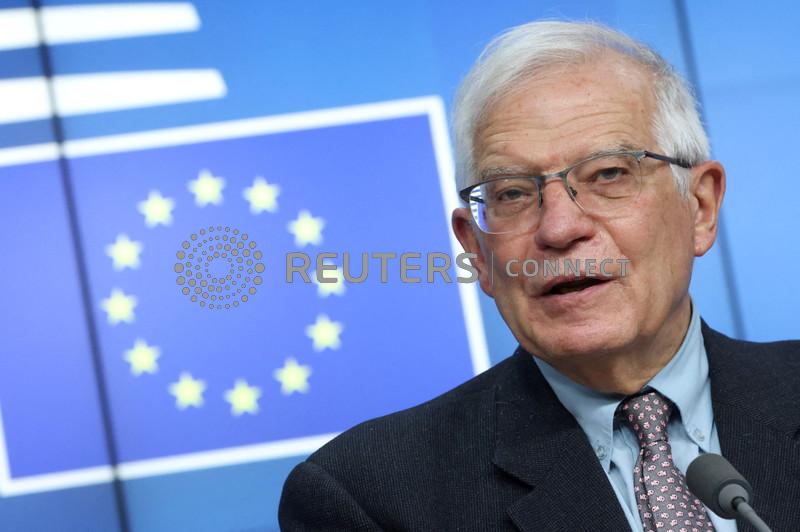 BRUSSELS (Reuters) -Russia is committing a war crime by blocking the export of millions of tonnes of Ukrainian grain, the European Union’s foreign policy chief said on Monday as EU foreign ministers met to discuss ways to free up the crop amid a global food crisis.

Ukraine is one of the top wheat suppliers globally, but its shipments have stalled and more than 20 million tonnes of grain have been trapped in silos since Russia invaded the country in February and subsequently blocked its ports.

Russia denies responsibility for the food crisis, blaming it on Western sanctions imposed on Moscow that have led to a jump in global food prices and warnings by the United Nations of hunger in poorer countries that rely heavily on imported grain.

“One cannot imagine that millions of tonnes of wheat remain blocked in Ukraine while in the rest of the world people are suffering hunger,” he told reporters as he arrived for the talks in Luxembourg. “This is a real war crime.”

Russian Foreign Minister Sergei Lavrov said on June 8 that the onus was on Ukraine to solve issues with grain shipments by de-mining the approaches to its Black Sea ports, and that Moscow needed to take no action because it had already made the necessary commitments.

The EU supports efforts by the United Nations to broker a deal to resume Ukraine’s sea exports in return for facilitating Russian food and fertilizer exports, but that would need Moscow’s green light.

Meanwhile, Germany and other countries are working on enabling grain transport via land routes to release at least some of the crop as the new harvest is starting while part of the old harvest is still sitting in Ukrainian silos.

“It is clear that, in the end, we will certainly not be able to get out all grain but if we even just manage to free part of it, on various routes, then this will help as we are facing this global challenge,” she told reporters in Luxembourg.