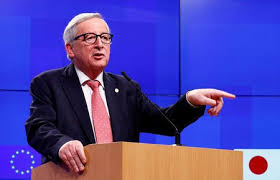 WARSAW (Reuters) – Poland is unlikely to leave the European Union, even if the ruling eurosceptic Law and Justice (PiS) party wins re-election this year, EU executive head Jean-Claude Juncker said in an interview published on Monday.

In response to a question by the Polish daily, Rzeczpospolitaon on whether there will be a “Polexit” after parliamentary elections in Poland in the autumn, Juncker said: “No.”

“Poland is with us (the European Union) because we have common values,” Juncker said.

His statement came as Poland’s biggest opposition front has repeatedly warned that Law and Justice could eventually lead the country out of the EU.

PiS has been in conflict with the European Commission over its handling of Polish courts since the start of 2016. Most EU countries back the commission.

Worried about the government flouting basic democratic standards in the country of 38 million people, the commission has launched an unprecedented procedure to see whether Poland is observing the rule of law.

The party has also clashed with Brussels on environmental protection and migration.