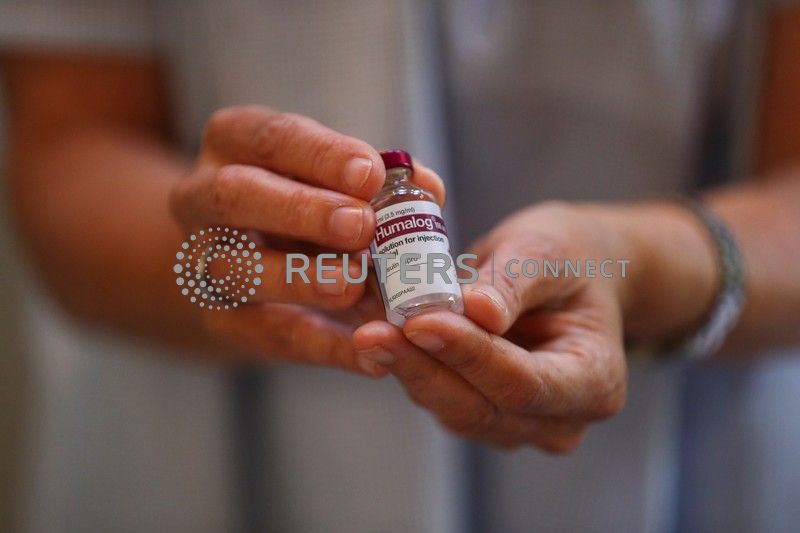 BRUSSELS (Reuters) – Several European countries have banned some exports of insulin in recent weeks, a move industry officials said was based on a misguided fear that the COVID-19 pandemic would cause shortages of a drug vital to millions of diabetes patients.

EU curbs on drug exports during the coronavirus emergency mostly cover medication used to treat COVID-19, including muscle relaxants, painkillers and hydroxychloroquine. The head of the EU executive has called on governments to lift such bans, warning they could precipitate dangerous shortages.

Some countries, worried by increasing demand amid lockdowns and wary of price competition from importing states, have added insulin to their lists of drugs banned from export.

While no shortages have yet emerged in Europe, industry officials say this has raised concern about the steady supply of a drug used daily by around 60 million people on the continent.

“We see products outside the scope of COVID-19 on these lists. They should not include products such as insulin,” Martin FitzGerald, deputy director of the European Healthcare Distribution Association told Reuters.

“This is not acceptable and pose risks of shortages.”

Diabetes patients are usually prescribed insulin for one month, but prescriptions have been extended to three months in some European states, further spiking demand, FitzGerald said.

Some exports of insulin are currently banned in a dozen countries, including France, Britain and Portugal, according to national listings reviewed by Reuters. Some states, including Poland and the Czech Republic, were restricting its export before the coronavirus crisis because of local shortages.

France’s ANSM medicine agency did not answer a request for comment. Two industry sources with direct knowledge of the matter said the French ban was aimed at preventing distributors selling drugs abroad at higher prices during the crisis.

A spokesman for the British health ministry said Britain had only banned so-called “parallel” exports of some drugs in a bid to prevent essential medication needed by British patients from being sold abroad for higher prices.

The Portuguese regulator was not immediately available for comment.

DISRUPTION IN SOME COUNTRIES

Most national trade restrictions only apply to distributors, which cover up to 65% of drug supplies to pharmacies. Hospitals are mostly supplied directly by manufacturers, which are generally exempted from export bans.

“Banning the export of insulin is illogical, it makes no sense,” said Kasper Ernest, secretary general of Affordable Medicines Europe, a body representing pharmaceutical traders that are responsible for around 3% of Europe’s supplies.

He said there was enough insulin in Europe but trade restrictions could create temporary shortages in some places.

“At the global level, restrictions imposed to tackle the spread of the COVID-19 pandemic are disrupting the supply chain for insulin and other essential diabetes medicines in some countries,” Lorenzo Piemonte of the International Diabetes Federation told Reuters, although he said he was not aware of such issues in Europe at the moment.

Jan De Belie of the Pharmaceutical Group of the European Union, which represents pharmacists, said there have been no reports so far of insulin shortages in Europe.

Manufacturers said there had been temporary shortages in Italy and Spain of drugs used to treat COVID-19 patients, but no indication of problems with other medicines.

“Supply and manufacturing are, however under strong pressure”, the European Federation of Pharmaceutical Industries and Associations (EFPIA), the trade body for drugs manufacturers, said in a statement to Reuters.

Novo Nordisk, the world’s largest maker of insulin, was not immediately available for comment on specific trade restrictions. Sanofi, another top manufacturer, had no comment.