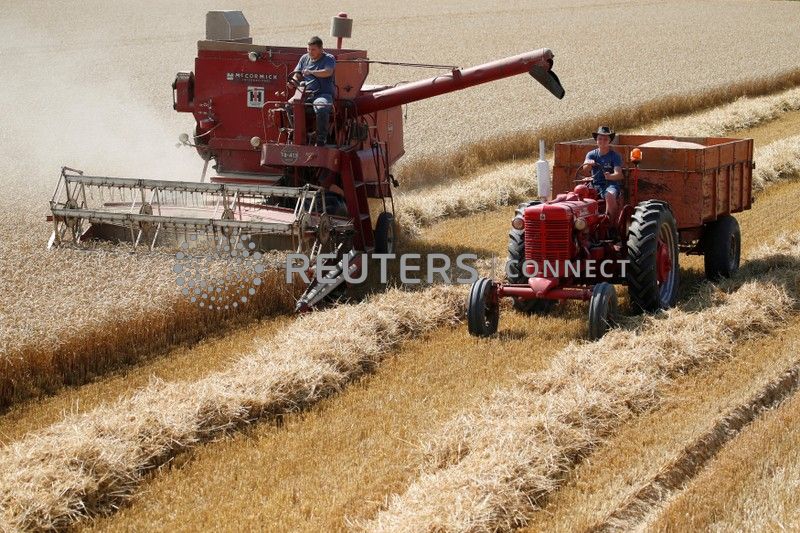 The top four growers France, Germany, Britain and Poland are expected to reap larger crops after drought damage last year. But late rain in Germany is hindering the final stages of work.

In the EU’s largest wheat producer France, harvesting is ending with expectations of a big crop. The farm ministry raised its 2019 soft wheat crop estimate to a four-year high of 38.2 million tonnes, 12% above last year.

That was still below market estimates of around 39 million tonnes, which would be the second-largest crop on record.

“The wheat harvest is being rounded off, with a few thousand hectares remaining in coastal areas,” one trader said. “Some people in the market are working with a 39.5-40 million tonne range for the crop.”

The French harvest shows reasonable wheat quality, including adequate protein content of 11% or above, traders said.

In the second largest producer Germany, traders estimate over 85% of wheat has been harvested.

“The heatwave enabled fantastic progress but now we are suffering from rain in the last areas in north Germany, especially Schleswig-Holstein,” one analyst said. “It has rained there almost every day for the last week. Unless we get a return to sunshine next week, some late quality loss is possible.”

Britain has begun harvesting what is expected to be its largest wheat crop since 2015, welcomed by farmers against the backdrop of Brexit uncertainty.

“There will be concerns in the back of a few minds about quality, particularly as there is quite a lot of rain coming at the end of the week,” said Jack Watts, chief combinable crops adviser for the National Farmers Union.

Watts said a crop of around 15.2 million to 15.5 million tonnes is currently expected from 2018’s 14.0 million although “it could well creep higher.”

“The quality will be really important this year as we prepare for Brexit,” he said, noting traders were nervous about selling British milling wheat into the European market until they have more information about quality.

Britain is due to leave the EU on Oct. 31, after which tariffs could be imposed on exports into the bloc if there is no withdrawal agreement.

Harvesting in Poland is advanced with about 70% of wheat cut so far, said Wojtek Sabaranski of analysts Sparks Polska.

“Local rains slowed down threshing a bit but this is not a major problem,” Sabaranski said.

Sabaranski forecast a Polish crop of 10.7 million tonnes, up 8% from last year.