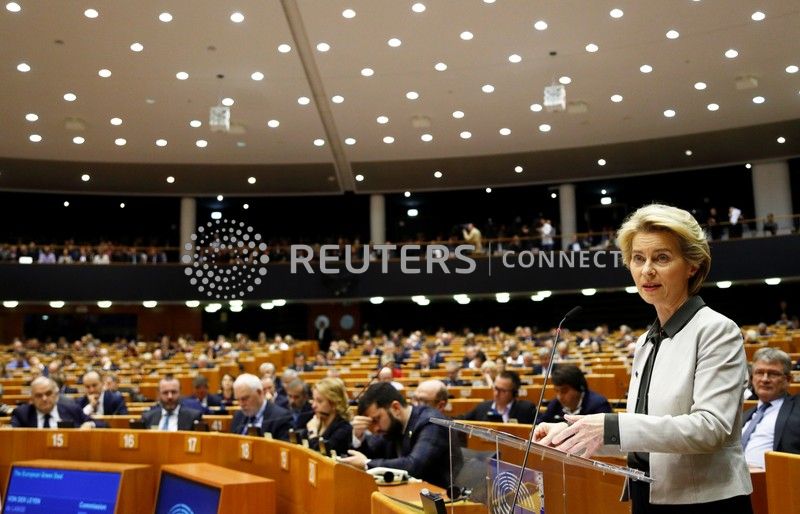 BRUSSELS (Reuters) – European Union leaders agreed on Friday to a 2050 climate neutrality target for the bloc, after hours of haggling with Eastern European states demanding funds to support a transition away from fossil fuels and a role for nuclear power.

But they left Poland out of the commitment for now, agreeing to return to the issue next June, and also left the door open for the Czech Republic include nuclear in its future energy mix.

Diplomats said the summiteers’ final decision – reached 10 hours after they had gathered – said “one member state”, meaning Poland, could not commit to the 2050 target. They said that Poland had earlier floated the idea of setting the date at 2070.

The decision came just a day after the bloc’s new executive unveiled a 100-billion-euro ($110 billion) plan for net-zero greenhouse gas emissions by mid-century, declaring it the EU’s “man on the moon moment”.

“Agreement on climate neutrality by 2050 … (the European Council) reaches a deal on this important goal,” tweeted Council President Charles Michel, who chaired a fraught summit meeting of 27 leaders in Brussels. “Nothing worth having comes easy … But we did it!”

The two-day summit is the first since Germany’s Ursula von der Leyen took office as the new head of the European Commission, and a failure to agree on the climate neutrality deal, her biggest initiative, would have been a setback for the new leadership.

Hungarian Prime Minister Viktor Orban set the tone ahead of the talks, insisting that less affluent countries of eastern Europe must get generous and precise financial guarantees for their transition away from fossil fuels.

“We cannot allow Brussels bureaucrats to have poor people and poor countries to pay the costs of the fight against climate change,” Orban said.

However, the main holdouts were the Czechs and Poles.

Prague’s demand that it should be able to use EU money to build nuclear power plants on its soil ran into opposition from Austria, Germany and Luxembourg. Meanwhile Poland wanted firm guarantees that EU climate investment would not crowd out the bloc’s development aid for its poorer peers.

“It is important to have certainty that nobody will stop us in the construction of nuclear power units,” Czech Prime Minister Andrej Babis told reporters. “We have to have electricity for people, for firms, and heating.”

The Czech Republic generates about half of its electricity from coal and wants to phase most of it out over the next 20 years, replacing part of it with new nuclear power plants.

Hungary relies on nuclear power for about a third of its energy needs, with coal making up less than 15% of its energy mix. It wants to abolish coal by 2030 and replace it with a mix of nuclear, gas, renewables and energy imports.

In Poland some 80% of power is generated from coal and discussions about introducing nuclear energy have not yet been settled, partly due to high costs.

The climate discussion feeds into another tricky debate, over the bloc’s next long-term budget for 2021-27, on which no agreement was reached during a brief summit discussion that pitted a frugal camp against those seeking a heavier outlay.

“I wasn’t the best at mathematics but this, I think, is not going to add up.”